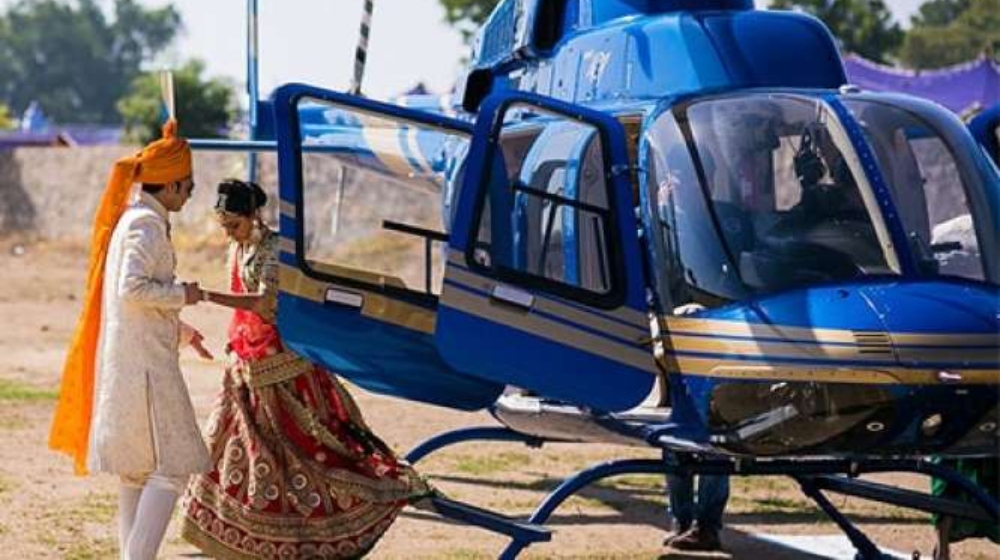 Looks like the trend of taking a helicopter to your Barat is catching on. Last week, a businessman hired a helicopter to take his Barat from Islamabad to Azad Jammu and Kashmir.

British trader Raja Sohail and his family flew to the Bratla village in Kotli for his wedding. This is deemed to be one of the most expensive weddings in AJK.

Previously, at a wedding in Mandi Bahauddin, a helicopter was flown in to shower the guests with rose petals and currency notes!

Not only were the guests at the wedding shocked by the brazen display of wealth, but the news also went viral on social media.

According to reports, there was an entire setup to shower money and rose petals at the ‘Barat’ guests.

The Downside of a Helicopter Barat

Private jets have already been bashed for boosting carbon emissions. As far as ‘helicopter barats’ are concerned, they are no different.

A 2019 study revealed that private jet passengers account for 10 times as many greenhouse gas emissions as a commercial traveller and 150 times more than train travellers.

The alarming numbers had the United Kingdom consider a private jet ban by 2025. Private helicopters stay off the radar, unlike private jets. Helicopters are mostly not subjected to engine emissions regulations, unlike other aircraft.

When helicopters emit more pollutants than any typical car, then why aren’t their emissions monitored and regulated?

Meet Saifullah Kashmiri, The Man on a Mission to Clean Up Pakistan

Evidence asserts air quality impact of helicopter engine emissions is localized, meaning that helicopter movements in a city will have a significant impact on nearby air quality.

Since jet fuel causes so much pollution, travelling via passenger airbuses or taking eco-friendly alternatives is better for the planet.