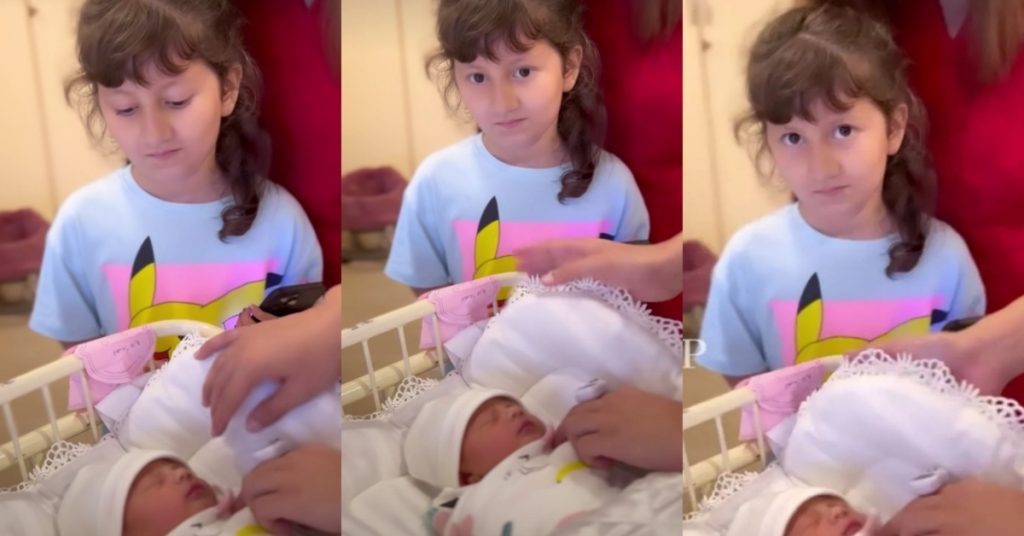 As Shahroze Sabzwari and Sadaf Kanwal welcome their first child, people are questioning whether Shahroze’s daughter Nooreh Shahroze is hit with sadness. Is this sadness or sibling envy?

As the celebrity couple became parents to a baby girl, a video of Nooreh being introduced to her half-sister is making rounds online. Based on the little girl’s reaction, Netizens speculate that the ordeal made Nooreh sad.

As family and friends went to see the mother and new baby, stylist Tabesh Khoja posted a reel of the whole ordeal.

He captioned the video;

Amid all the cute moments of the family rejoicing the birth of the baby girl, there’s a scene of Nooreh reacting to seeing her baby sister.

While the adults were joyous, meeting up, greeting each other, shedding tears of joy, and having fun. Nooreh Shahroze was not.

In the video, we can see Nooreh meeting her little baby sister with her grandmother donned in red in the background. Netizens say they spotted sadness in her eyes.

Is this sadness a sign of sibling envy? Sibling envy is the jealousy exhibited by young children feel toward a new sibling. This usually stems from not being able to adjust to such a big change at such a young age.

The most common sign is increased demands for attention. An example of this is when older children want to be held and carried, just like the newborn.