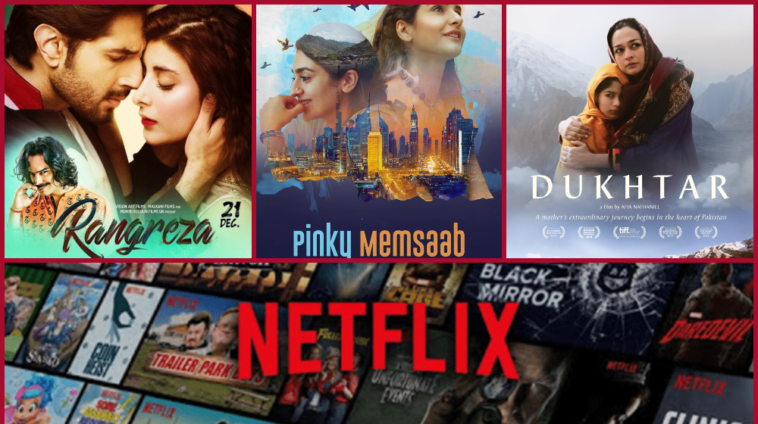 Netflix is an extremely convenient platform for watching movies and TV series all over the world. In fact, after going global the online streaming giant has made efforts to serve up a good helping of local in the countries that it operates in. We even got a lot of high-profile Pakistani movies on Netflix now.

Need a plan for the weekend? Want to have a relaxing week and enjoy some quality time at home? From cult favorite series to award-winning movies, Netflix has got you covered.

Lets take a look at some readily-available Pakistani movies on Netflix that you can watch right now:

A film about the lives of a naive housekeeper and a delightful socialite that are weaved together in Dubai, this self-contradicting story promises to be an emotional roller-coaster!

The story of this romantic-comedy flick rotates around Teefa (Ali Zafar) who is a goon for Butt Sahab (Mehmood Aslam). The problem arises when Butt Sahab asks Teefa to grab his companion’s little girl Anya (Maya Ali).

The movie’s plot revolves around the lives of three friends played by Mahira Khan, Adeel Husain and Shehryar Munawar who have a great passion for music. They face many difficulties when they try to pursue a career in music.

The film also shows us how parental restrictions that are imposed on the children in our society can sometimes do more harm than good.

Waar is a 2013 Pakistani action-thriller film directed by Bilal Lashari. The plot of the film involves a counter-terrorism operation being conducted in the northwestern tribal region of Pakistan.

This Urwa Hocane and Bilal Ashraf-starer is about the journey of two people who belong to different backgrounds but eventually fall in love.

Rangreza has been directed by Amir Mohiuddin and was released in December 2017.

Netflix is Begging Users Not to Do the #BirdBoxChallenge

This rom-com film, Balu Mahi became quite popular after it’s release in 2017.

It stars Osman Khalid Butt and Ainy Jaffri Rehman in the lead roles. Things take a sharp turn when Bilal (Balu) accidentally crashes into the wedding of Mahi, thinking that it’s his ex-girlfriend’s wedding.

This 2016 rom-com is also available on Netflix and it stars Armeena Khan, Ali Rehman Khan and Bilal Ashraf in the lead roles.

The story of Moor revolves around the railway stations of Balochistan, especially the station of Zhob Valley Railways in 1984.

O21 or Operation 21 is a spy thriller film directed by Jami.

Starring Ayub Khoso, Shaheen Shahid and Shamoon Abbasi in lead roles, the story of the film revolves around a very difficult plan that needs to be completed within 21 hours.

Wrong Number is another Pakistani romantic comedy film on Netflix.

Its story revolves around Sallu (Played by Danish Taimoor) who wants to be a show-biz star but his father Haji Abba (Played by Javed Sheik) has other plans for him. Laila (Played by Sohai Ali Abro) loves Sallu but Sallu is least bothered and keeps on fighting to follow his dream.

Dukhtar is a rom-com with Danish Taimoor, Sohai Ali Abro, and Javed Sheikh in lead roles.

The story revolves around the life of Sallu (Danish) who wants to be a showbiz star but his father Haji Aba have some other plans. What we get is a sweet conflict between the father and the son.

Na Maloom Afraad is a barrel of laughs.

As for the cast, first we have Farhan (Fahad Mustafa) who is a sales representative at a life insurance company in Karachi. He is fired after he fails to complete any deal for a whole year. We also have Javed Sheikh who plays Shakeel Bhai. He is seeking a marriage proposal for Naina (played by Urwa Hocane). The whole movie takes place in a crime-infested Karachi, hence the name Na Maloom Afraad.

Which Pakistani movies on Netflix are you planning to watch this weekend? Let us know in the comments below!