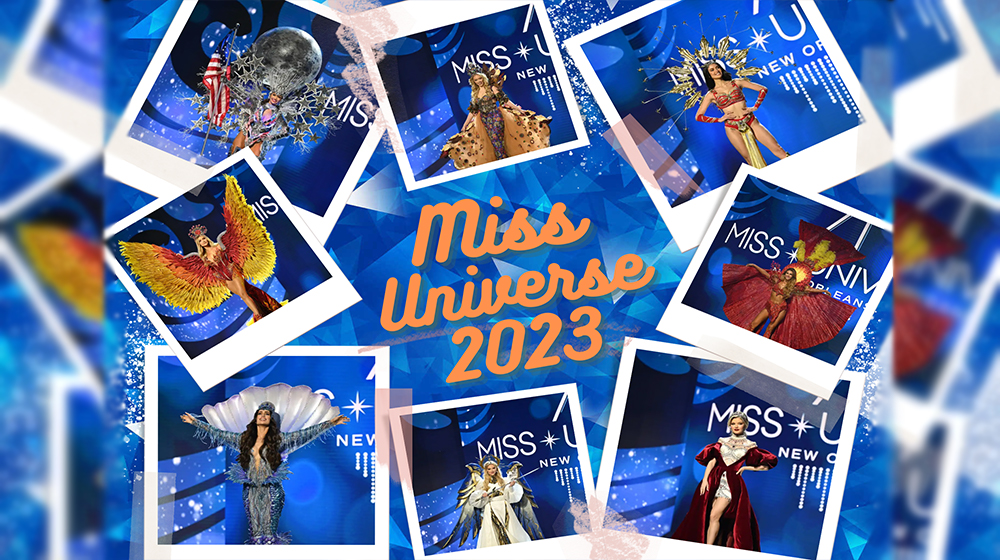 The 71st annual Miss Universe Pageant was a spectacular event, featuring some of the most beautiful and talented women from around the world.

From the stunning contestants to the dazzling performances and iconic crowning moments, it was a night to remember.

Let’s have a look at the top 10 most beautiful models from the 71st annual Miss Universe Pageant., highlighting their unique qualities and the reasons why they stood out among the competition. 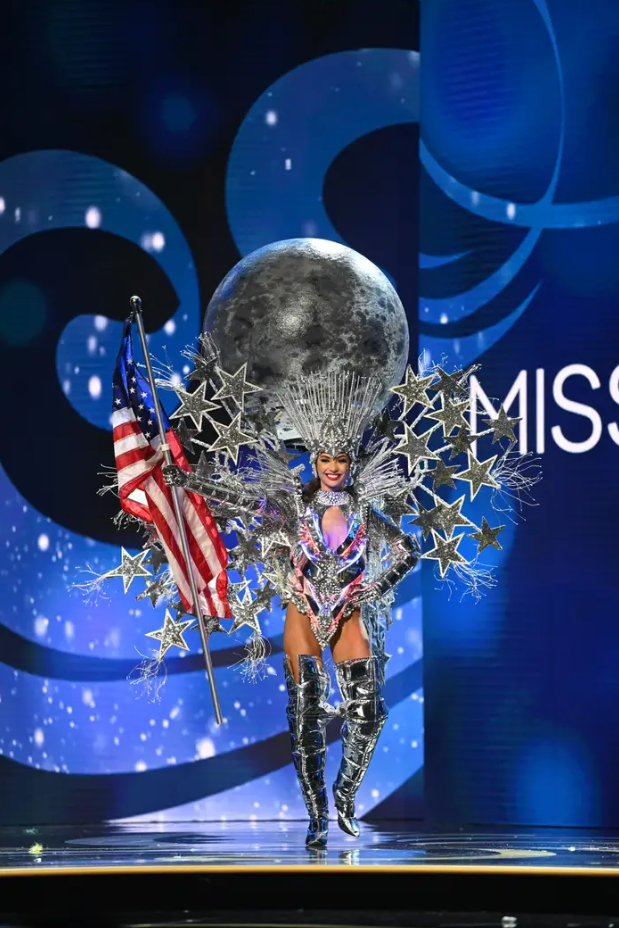 R’Bonney Gabriel’s outfit consisted of a silver bodysuit adorned with glowing red-and-blue accents, coordinating silver boots, and an over-the-top backpiece. The costume nodded to the 1969 moon landing with her star-studded ensemble.

Large silver stars protruded from the backpiece, as did a replica of the moon. Gabriel was also wearing an American flag. 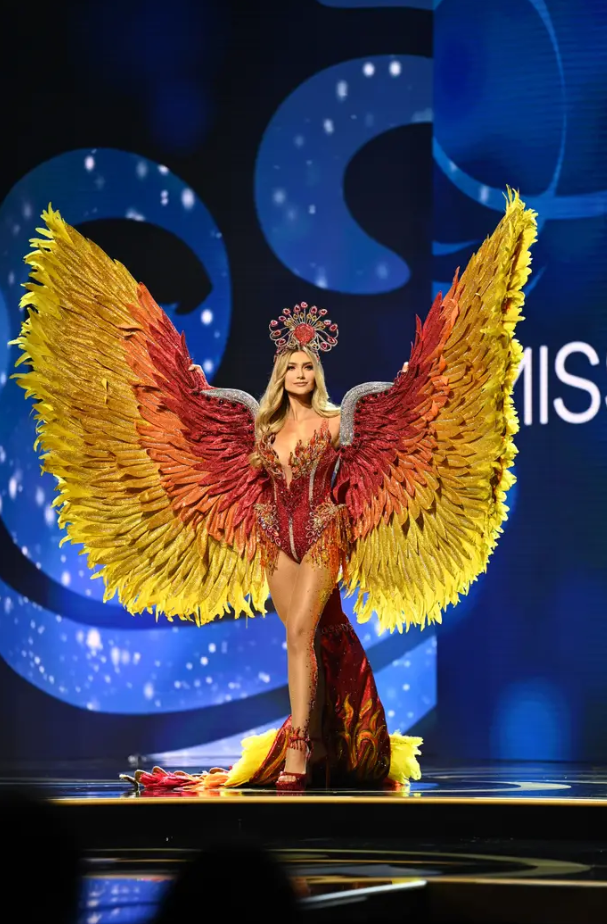 The model’s dress was embellished with 1,100 Swarovski crystals.. 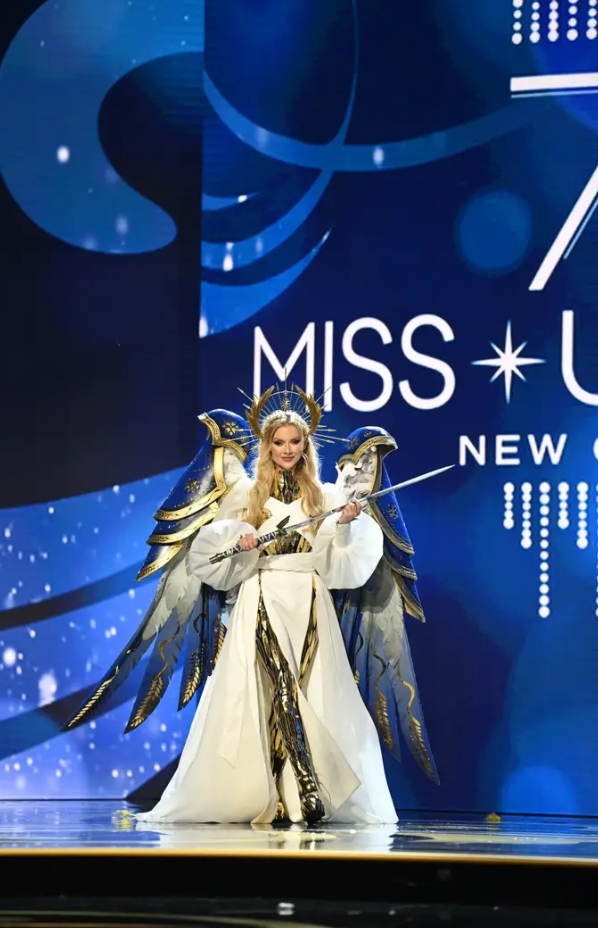 Viktoriia Apanasenko wore a white gown with a gold bodice and a blue backpiece with feathers made to appear like wings that stretched during her catwalk.

Apanasenko told Insider that she came up with the idea for the outfit while watching the war in Ukraine and that it took four months to complete with limited resources and candlelight. 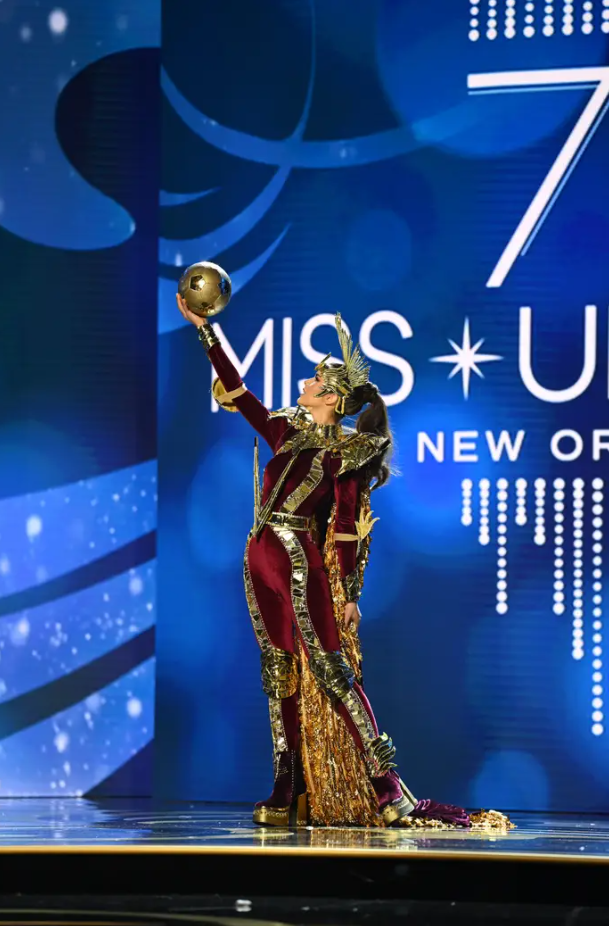 Dudamel donned a burgundy bodysuit since Venezuelan sports teams compete in the hue. The model was inspired by her country’s sporting teams and elevated them with her bodysuit.

She elevated the outfit with gold adornments, a gold cloak, and a gold soccer ball she held as a prop also known as Golden Ball. 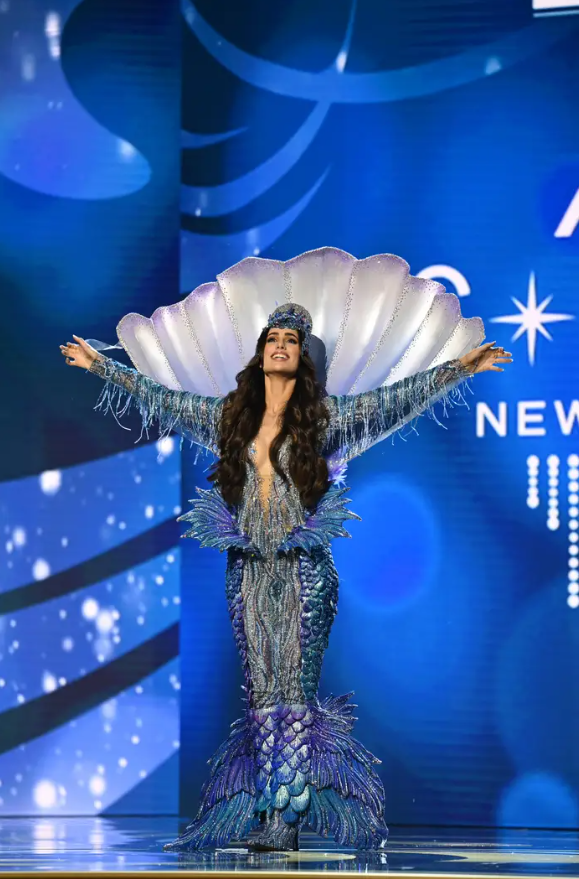 Her boots were designed to imitate a fish’s tail, and the outfit was completed with a pearl set on top of the model’s head.

According to the Miss Universe presenters, Mia Mamede’s “goddess of the ocean” outfit represented the abundance and diversity of Brazil’s marine ecology. 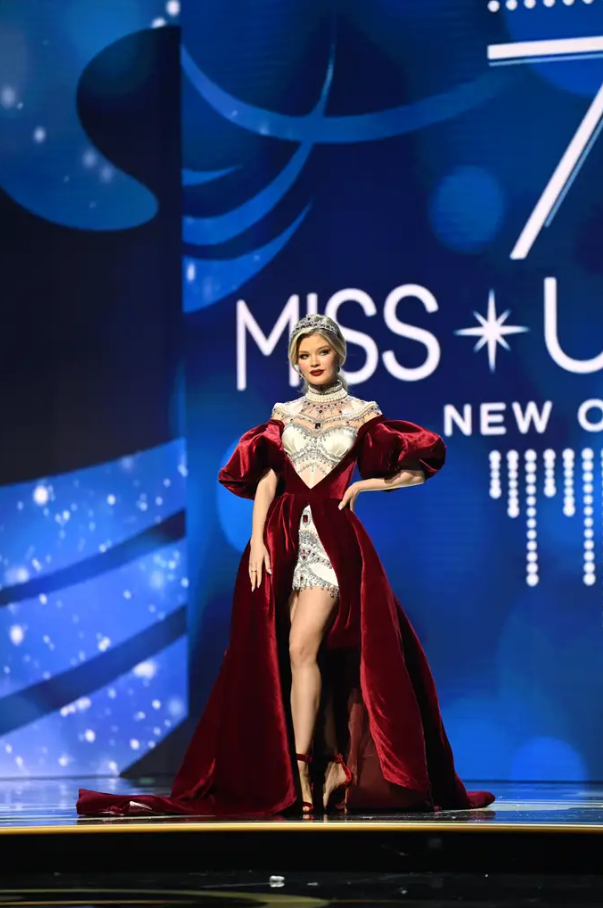 Atop the white ensemble, she donned a crimson velvet gown with short balloon sleeves. She accessorized with matching red shoes and a Russian imperial crown.

It was developed with the assistance of Russia’s State Hermitage Museum in Saint Petersburg. 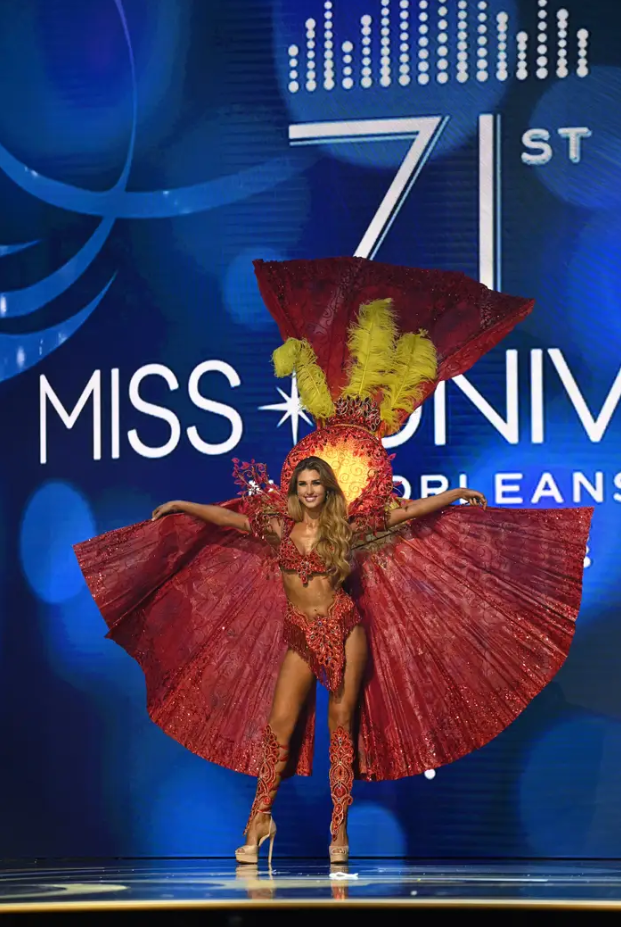 It was made from reclaimed materials. 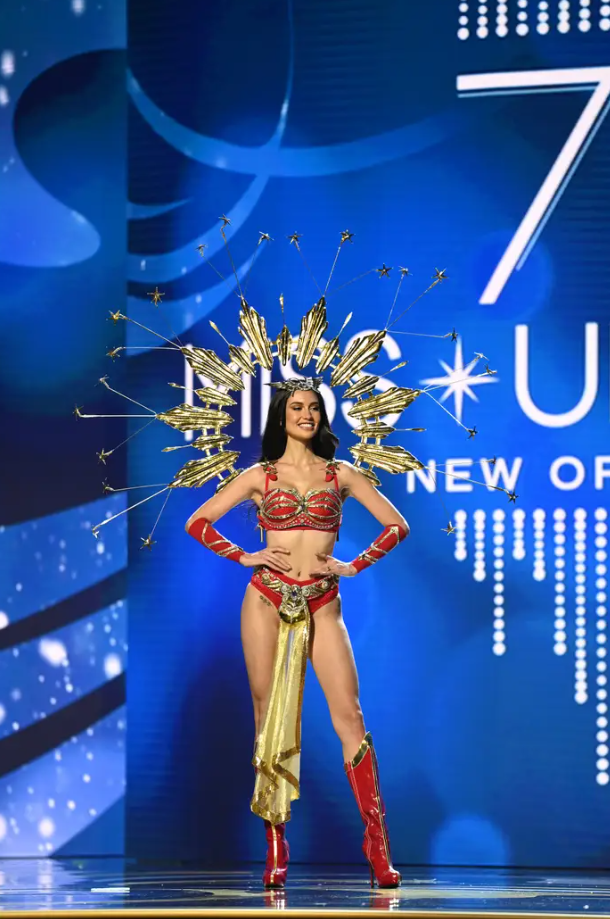 Her red-and-gold ensemble included a gleaming bra, matching gloves, and knee-high boots. She also donned a gold star headpiece that matched her back rings.

Her clothing symbolizes her goal of defending those in need. 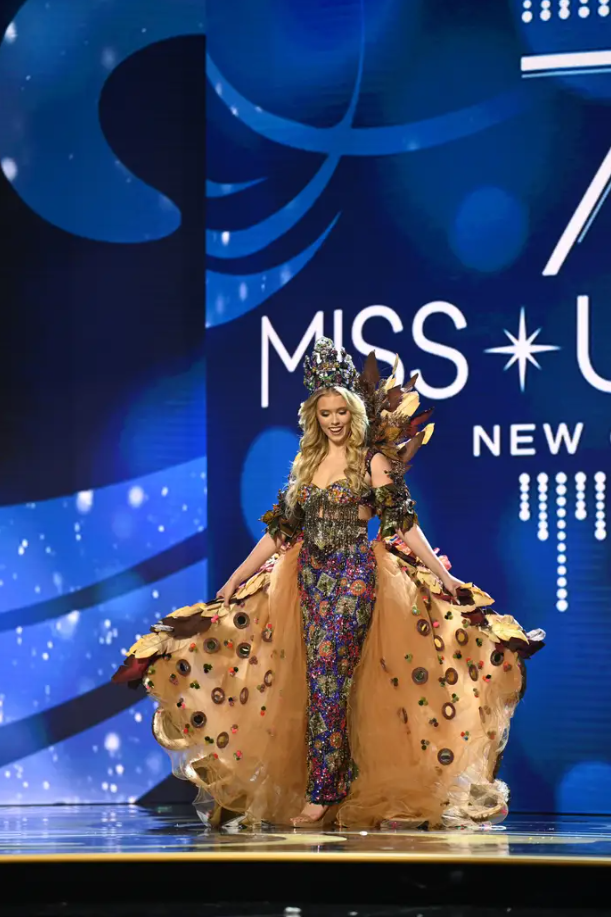 Alia Guindi’s dress pays homage to chocolate in numerous ways, as revealed by the Miss Universe organization during the contest.

Aside from the train, the outfit’s multicolored skirt and top were designed to appear like fruit, and the off-the-shoulder sleeves were inspired by cocoa leaves. Her backpiece resembled a cocoa leaf as well. 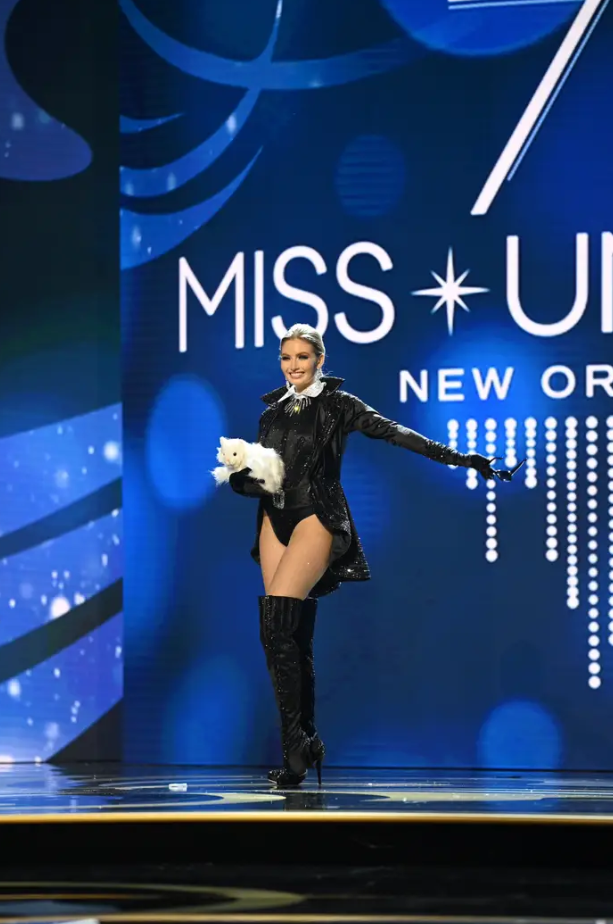 Soraya Kohlmann wore a Swarovski crystal-adorned bodysuit and jacket with matching boots to take her own twist on one of Lagerfeld’s classic black ensembles.