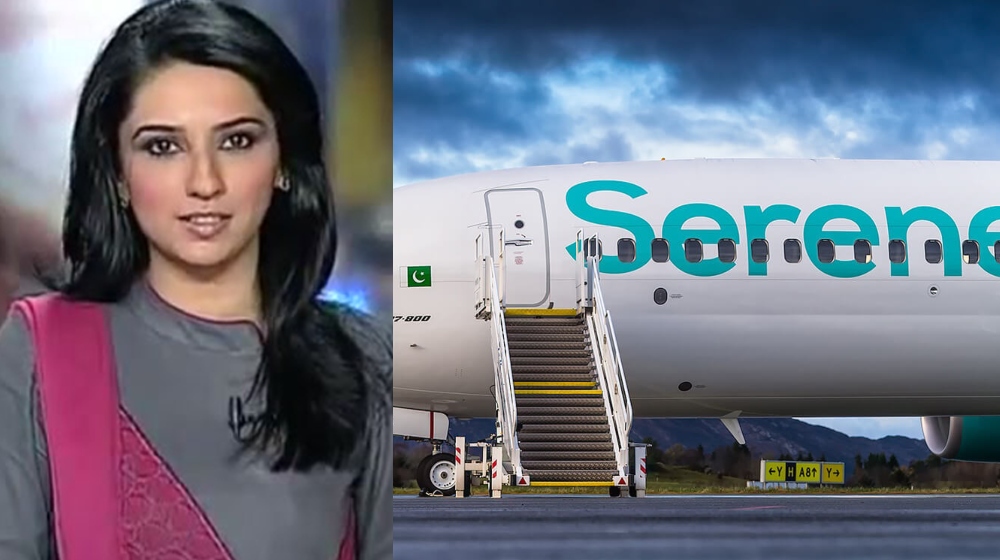 Here we go again. Now Serene Air is making small talk awkward by asking deeply personal questions from its customers. This time around Maria Memon was on the other end, so of course, she called them out. Turns out it might not be what you think.

While traveling via Serene Air, the television news presenter Maria Memon was asked on a flight:

Hello @SereneAirPak !
Is there a new SOP to ask your female passengers if they are married?
My husband , who was standing right next to me, didnt get asked about his marital status?
What does a woman’s marital status got to do with her travelling?

This doesn’t seem to be ‘unheard of protocol’ for the airline based on how others reacted.

For its part, Serene Air reached out to the anchor and apologized:

We sincerely apologize for the inconvenience. Kindly inbox us your flight details.

Marvi Memon reveals how she was specifically singled out with that question because she’s a woman. Meanwhile, her husband who was with her, was not asked this question. Many others pointed out that at least Maria Memon received an apology.

Just because it happened to a media person, Serene Air apologized on social media, nothing more than that. I agree on Why don't they simply issue a warning to their staff rather than just apologizing here? 🤔

Women do not want to be asked personal questions.

Shameless question. Must never be answered. It should be noone's business to ask personal questions like marital status, religion or age. Unfortunately here right to privacy has no value

That’s when it was pointed out this isn’t exactly the first time. All Pakistani airlines do this.

This happens again and again, and you always respond with the same. Why is there no notification being issued to your staff? Why does this only seem to be happening on Serene?

It's not only serene. Airblue has same question to ask

Actually there’s a good reason why this question is asked.

Someone pointed out this is in fact, a cultural constraint, just not in the way we think. Maybe Pakistani airlines aren’t trying to make women uncomfortable. Maybe they’re trying to gauge out who to ask the question that actually matters;

The reason airlines need to ask this is because flying actually affects unborn babies. In fact, women aren’t allowed to board planes in their third trimester. For that, the airline needs to know first if you’re even pregnant. They usually ask if you’re married first, because Pakistani culture demands more sensitivity.

Dear ma'am, it's actually a medical question. Pregnancy is procoagulant state and long air travel is a big risk factor for thromboembolism too. So it's needed and should be asked!

They probably want to know if a passenger is pregnant by asking their marital status lolz. That’s a desi way 🤔

Then there were people pointing out since Serene will just apologize, there was no need to tweet it out.

You should take it as compliment as you might be looking very young.Always think positive.Anyway I condemn this Maria should not happen

The SOP says you should complain on desk! Did u?

Maybe asking the pregnancy straight up would save everyone the hassle. That’s why people cracked a joke or two about this.

What kind of society is this

May be her captain wanys to know😛😛💍

Then there were the really bad jokes….

A precautionary measure , a stitch in time to avoid potential #metoo activity.