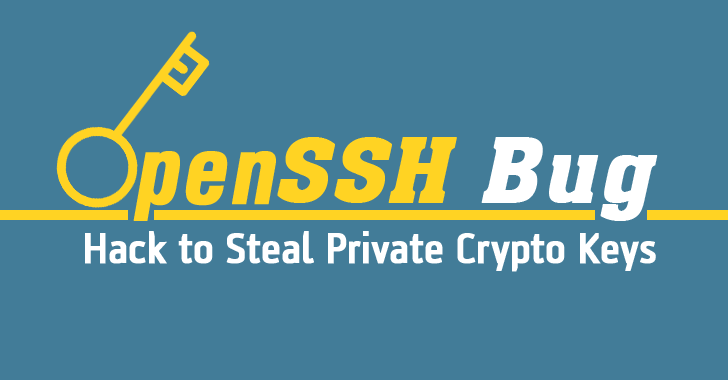 A ‘serious’ security vulnerability has been discovered and fixed in OpenSSH – one of the most widely used open-source implementations of the Secure Shell (SSH) Protocol.

The critical vulnerability could be exploited by hackers to force clients to leak their secret private cryptographic keys, potentially exposing users to Man-in-the-Middle (MITM) attacks.

What Causes the Flaw to Occur?

The serious bug was actually the result of a code that enables an experimental “roaming” feature in the OpenSSH versions 5.4 to 7.1 in order to let users resume connections.

Impact of the Vulnerability

This new feature can be exploited by hackers, who could use a malicious OpenSSH server to trick an affected client to give up the SSH keys when they try to log in.

Cyber crooks with one compromised server can secretly grab SSH private keys required to log into other systems from a user’s PC, allowing them to jump from server to server.

The vulnerability, which is said to be years old, was uncovered by researchers from Qualys’ security team on 11 January and the issue was fixed within three days by the OpenSSH team with the release of a patch.

Here’s what OpenSSH officials said in an advisory:

The matching server code has never been shipped, but the client code was enabled by default and could be tricked by a malicious server into leaking client memory to the server, including private client user keys.

The authentication of the server host key prevents exploitation by a man-in-the-middle, so this information leak is restricted to connections to malicious or compromised servers.

Who is Affected by the Serious Flaw?

The flaw resides in the versions 5.4 to 7.1 of the OpenSSH client, which end users use to connect to servers. It does not reside in versions used by servers themselves.

So, users don’t have to update OpenSSH on the server side (Droplet), but should update the OpenSSH client on their local computer.

How to Fix the Flaw?

The OpenSSH team patched the security flaw in version 7.1p2 recently.  Users and organisations are strictly advised to patch their OpenSSH implementations immediately, as well as regenerate their SSH private keys as a precaution.

The latest builds of FreeBSD and OpenBSD have also been patched, as have Debian, Ubuntu, and RedHat Enterprise Linux (RHEL).

Since security patches and updates are being released for the affected distributions, the client-side roaming feature causing this security bug can be disabled manually in order to resolve the issue.

On OS X, Linux and BSD variants, disabling roaming feature can be done by adding a line of code to your SSH configuration.

On FreeBSD and Linux

Run the given command to add the new line to your configuration:

Run the given command to add the new line to your configuration:

Once this is done, you need to close any open SSH session in order for the change to be effective.

OpenSSH said they are not aware of attacks in wild exploiting this flaw, but Qualys said this issue may have already been exploited in the wild by sophisticated attackers.

Later on Thursday, Qualys published a post, including a proof-of-concept exploit code, effectively lighting a fire under every affected OpenSSH client.

The vulnerability is thought to be one of the most severe vulnerabilities discovered in the open-source software in years, and it’s difficult to say how big the impact will be.