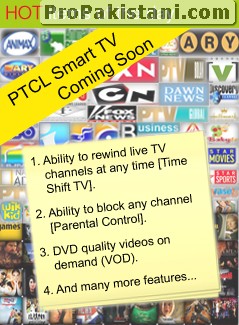 There have been rumors about PTCL’s IPTV for almost a year now. It was May 2007, when we first heard about IPTV services through Daily Times. However, we were repeatedly informed about dates regarding IPTV’s launch, which were not met.

Lately, Syed Yousaf Raza Gillani, Prime Minister of Pakistan, officially inaugurated PTCL’s IPTV services on May 17th, 2008; even then general public was not updated with any specifications regarding the services and pricings.

However, through some friends, I learned that PTCL has been testing their IPTV service in Islamabad through almost 100 beta testers and maybe in other parts of the country as well. Unofficial details revealed that IPTV covers almost 150 national and international TV channels and the service is going to cost around PKR 350 per month.

It is largely considered that IPTV is going to embark good market in Pakistan. First of two things that this IPTV service is going to impact is cable operators’ businesses. These cable operators who have been successfully getting some good revenues may face some tough time ahead. Defiantly, I would opt for parallel seamless broadcast of 150 channels, for PKR 350 instead of my local cable operator that keeps on going down due to power outage and other issues.

Another element that can come into consideration is when the Government will again try to cap the media. Supposing that huge numbers of PTCL customers are equipped with IPTV, then the government will be in a very good position to ban/filter content running on PTCL’s fiber optic.

In any case, we are going to witness and experience yet another techy thing in Pakistan.