As we saw a news yesterday, that cellular connections will now be posted directly to postal addresses instead of direct selling at franchisees (or other unauthorized outlets as well).

General public is terming Pakistan Telecommunication Authority as the sole responsible for taking the nation to this situation. However, following the tradition, no action has been taken against PTA or any other cellular company, like they take against general public for violating the law. 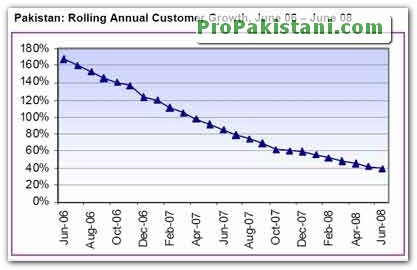 The boom in the telecom sector, which the PTA has been calling the success of regulator’s policies, is either over now, or we are heading toward the bad end with time. Indictors of telecom sector of Pakistan clearly shows that telecom companies are struggling with sales and on other hands the price war is hitting their revenues badly.

Lately, a senior official of Ufone reported that only 2 companies are going in profit, otherwise remaining cellular companies are bearing the loss despite of their existence in market for last 4/5 years (except Zong).

Growth rate in the country for cellular users has been slowing for some time now. In June 2008 monthly growth rate hit a new low of 1.5%. On a rolling annual basis, growth dipped below 40% for the first time since 2000.

I would like comments from experts regarding measures that PTA should take in order to better the situation, so we may not see another Millicom running away from our country in coming couple of years.