Orascom Telecom Holding (OTH) has reported a 76 drop in full-year net profit to US$431 million, after one-off gains a year ago were stripped out. Excluding the one-offs, which had included the sale of its operations in Indonesia and Iraq, the firm posted a 7 percent rise in its full-year results. 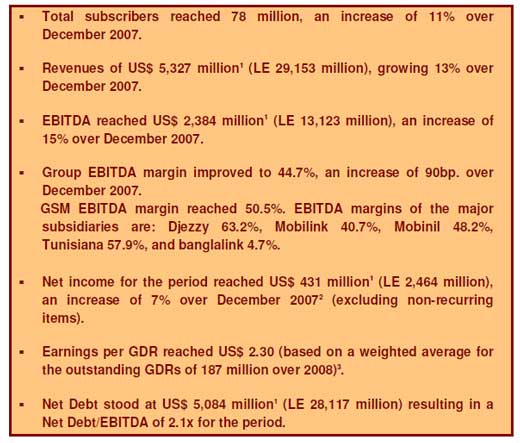 Naguib Sawiris, Chairman and CEO of OTH, commented on the results: “2008 demonstrated the strong resilience of our business in increasingly volatile and challenging global economic conditions. Most of our businesses, with the exception of Pakistan, have achieved their target in terms of growth and profitability. In Pakistan the difficult political, economical and financial conditions combined with the dramatic devaluation of the Pakistani Rupee have negatively impacted the strong performance of the rest of the group.”

Looking ahead, he added: “2009 is a challenging year with economic growth slowing further across the globe. The markets in which OTH operates will suffer from the economic downturn but probably less so than the more mature and developed economies as a result of lower penetration levels and limited fixed-line coverage which will ensure the mobile remains the key communication means for large portions of the population.”

“In 2009, we believe that all our markets, except Pakistan, will continue to show robust performance.”

The total subscribers reached the 78 million mark, up 11% over 2007, driven by strong growth in Egypt, with five million net additions in the year exceeding the 20 million subscriber mark, and Bangladesh, which added over three million customers to reach 10.3 million subscribers.

Pakistan subscriber growth was negative as a result of the combined effect of the adoption of the new 90 day validity regime and stringent registration policies that forced all operators to disconnect those customers that did not register their personal details within the set deadline. The introduction of a service tax on mobile services in Pakistan further reduced market uptake thereby reducing the number of gross additions. Subscriber growth in Algeria in Q4 08 was also negatively impacted by the mandatory disconnection of unidentified customers

Capital expenditures in 2008 were in line with the previous year. In Bangladesh we have continued to invest extensively in the roll-out of the network, while capex in Pakistan was mainly related to capacity and coverage. In Egypt a significant portion of investment was dedicated to the roll-out of the 3G network, which was launched in September. Capex in Algeria in 2008 was lower than the previous year mainly as a result of the time lag between the purchase order cycle and the accounting recognition of the capex.

The firm didn’t reveal any details of the subscriber base in its new North Korean network, save to note that they expect the business to become EBITDA positive in the first year of operation thereby significantly reducing the need to inject equity going forward. 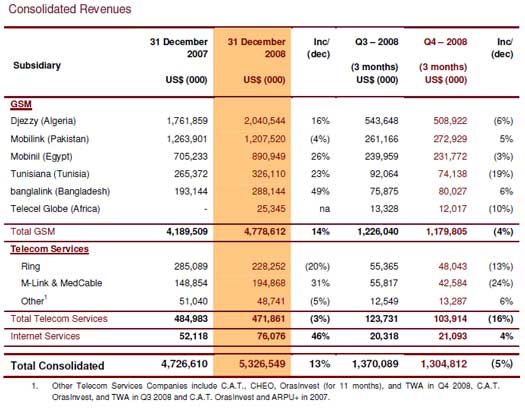