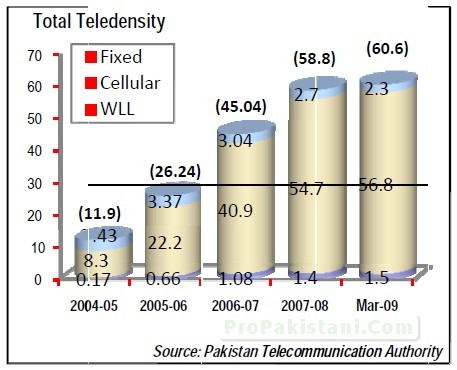 After experiencing phenomenal growth for last couple of years, Telecom sector of Pakistan exhibited positive but slow growth in terms of revenue, subscribers and teledensity during period July 2008 to March 2009.

After years of exponential growth, Pakistan Cellular Mobile industry is slowing down due to unstable and weak economy, added by saturated market. Government policy of blocking unverified SIMs and increased GST rate on telecom services in last budget have slowed down the sector, very significantly. 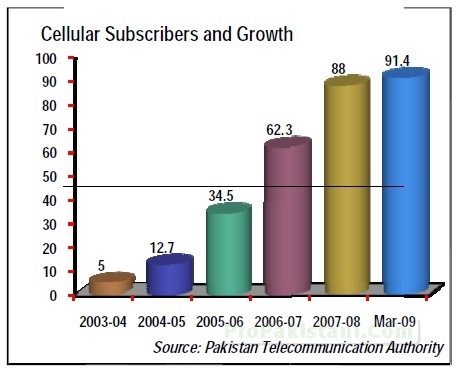 By the March 2009, there were total of 10,001 cities, towns and villages covered and 26,000 cell sites were installed by all cellular companies.

Fixed line services are experiencing declining trend across the globe, and so is the case in Pakistan. This is mainly due to introduction of new services that are more economical, cost effective, easy to deploy, easy for mobility and have array of value added services attached to them. Out of four major operators, PTCL and PTC have the privilege of being the mature operators.

Nayatel and WorldCall have joined in very aggressively; especially the innovative value added services provided by Nayatel have made it popular service provider in the capital city. Brain and Union communication have still not been able to make the mark in fixed line sector and are providing services to very small market.

Availability of mobile service on lower rates along with other attractive features also resulted in pushing down the popularity of fixed line. Total fixed line subscribers in Pakistan stood at a total of 3.7 million as of March 2009, yielding total teledensity of 2.3 percent. 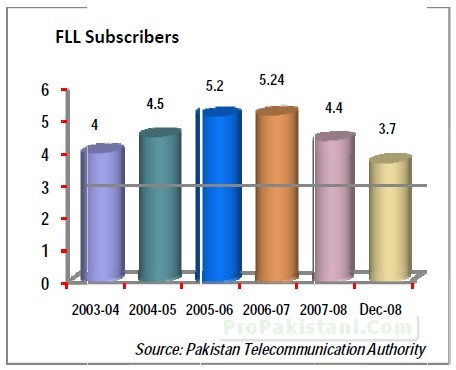 Wireless local loop services are becoming increasingly popular both for addressing the rural areas communication needs and the low population density areas due to its deployment advantages and cheaper rates.

The WLL solution in relation to fixed line requires less investment with high returns. Today WLL services are available across the Pakistan in 14 telecom regions. WLL operators provide services such as EvDO, that make them more usefull while on the go.

Popularity of WLL services are also obvious from the dropping figures of fixed local loop subscriptions – especially with reference to PTCL’s case, where a balancing effect of gain and drop in WLL and FLL subscriber is going on for last one year now.

There are currently 7 operators providing services in their licensed areas in addition to PTCL – which is offering WLL services across the country.

Total WLL subscribers stood at 2.5 million and density in the country touched 1.5 percent in March 2009.
There were total of 12,000 cities/ towns /villages covered by WLL operators by March 2009. 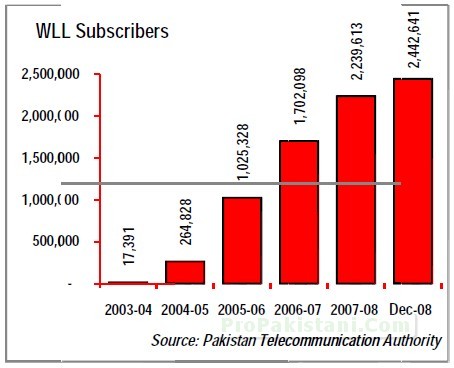 The Long Distance and International (LDI) segment of Pakistan telecom sector has gone through development and growth phases in very small period. The LDI when opened to liberalization actually attracted strong investor groups who visualized the high margin opportunity in it.

However, the effect of closely integrated telecom services, unexpected market reactions and illegal activities (such as usage of VoIP), resulted in an unsteady development and then growth of LDI segment.

To ensure maximum share in the market, companies went far beyond their limitations and dropped per minute rates to as low as 1 cent per minute. Also the grey traffic and absence of any defined system of reconciliation of international traffic resulted in drastically falling profits of LDI operators.

Currently 13 LDI operators are operational in the country, and the new mobile operator CMPak has also requested the regulator for issuance of LDI license.

PTA is apparently aware of its responsibility to provide level playing field and make sure that the investors do not go into default and the telecom consumers are not exploited. In this regard the authority issued the new regulation “Monitoring and Reconciliation of International Telephony Traffic Regulation 2008”, that would particularly record traffic, billing and quality of LDI services.

The authority is now able to do automated blocking of Internet Protocol Addresses (IPs), involved in illegal termination/ Origination of international traffic. In this regard, the authority has requested all ISPs to declare their IP addresses along with the antecedents of their customers so that illegal telecom traffic could be monitored.

PTA has also directed all LDI operators to maintain approved settlement rates for international calls at the level determined by the authority.

Card Payphone (CPP) services started in Pakistan in early 1990’s, when only PTCL was the main operator followed by the Telecard. However, in late 1990’s, the value added services were made available to competition.

With this a new era of communication started in Paksitan which resulted in increased telecom access around the country, increased employment opportunities and better returns on small investments.

However, issues like provision of access network by PTCL, fake companies, introduction of liberalization in around 2007, Card PayPhone companies started facing down trends and number of shutdown and mergers took place.

As of March 2009, there were total of 384,187 fixed, mobile and WLL payphones available across Pakistan. 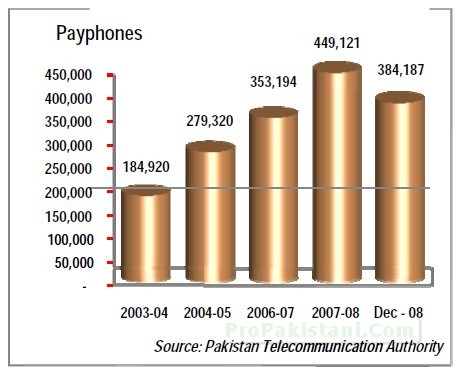 Broadband is experiencing healthy growth since last year and companies are providing broadband services with DSL, Cable, FTTH and WiMAX technologies across Pakistan – whereas DSL is the most popular technology.

Service providers are concentrating mainly on increasing subscriber base by providing attractive tariff packages and bundled services like cable TV, fixed line and broadband etc. The broadband operators are building their own network the door step of the users in order to avoid delays in last mile provision. Similarly, WiMAX  is becoming a popular broadband technology in Pakistan Where Wateen is major service provider, along with Mobilink Infinity and Wi-Tribe.
According to an estimate, total broadband subscribers would reach 5 million by end of 2010. 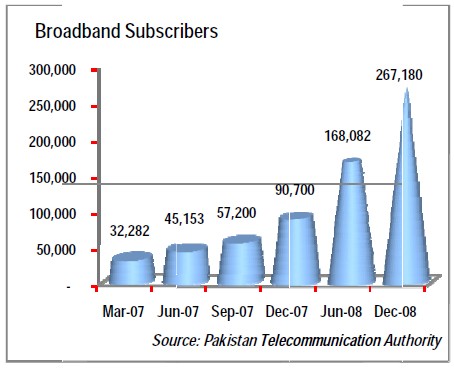 Despite a slowdown in economy, as well as of telecom sector, Foreign Direct Investment in Telecom sector of Pakistan continued in last few years, which indicate the confidence of foreign investors Pakistan’s Telecom Industry.

Telecom sector continued to attract major share of FDI in the country. During first two quarters (July to December 2008), telecom sector received over USD 716 million FDI inflows which become 31 percent of total FDI landed in Pakistan during this period. 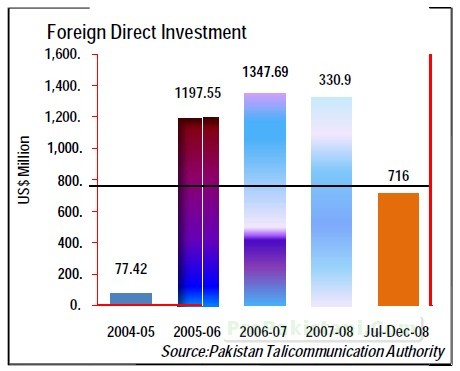 During the budget 2008-09, Government of Pakistan imposed custom duty of Rs. 500 per mobile handset on import and subsequently further regulatory duty of Rs. 250 was imposed by FBR on the import of each handset in August 2008.