Just read one recent RFP of PTA – as authority wants some ISP to provide internet and intranet services to PTA headquarter and its zonal offices. Out of proposed contract we found one very interesting thing, that we want to share with out readers – its about service downtime – and penalties on ISPs in case of downtime.

Funny as it sounds (as we don’t have any such policy otherwise) but the thing that amused me the most was the explanation of ‘Downtime”. Keep reading to know why i said it amusing.

Wikipedia definition of downtime is “a period of time that a system fails to provide or perform its primary function”.

Now, PTA in its recent RFP for award of internet services contract wrote something like this

Maximum Allowable Downtime (Downtime is considered when Both Wireless & DSL are down or degraded services defined below) in one complain or Day will be 30 Minutes.

Apparently – by this authority means that 30 minutes of downtime (per day) is allowable, anything beyond this will be penalized – that’s pretty kind of PTA I would say.

They didn’t stop here though. They have actually put in the penalties in case of downtime. Let’s have a look! 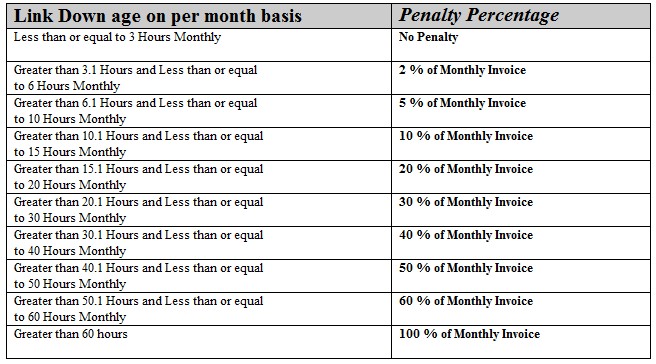 Most you people must be wondering that what’s so wrong about it? There is nothing wrong in here fellas, but just think that how much downtime you get at your own homes? Got my point!!.

Now, tell me how much penalty do you put in on your service provider for the downtime during the month. Zero % I am sure.

But don’t you think that PTA should start similar penalty kind of service contract for customers too. Am I right?

We receive emails from PTCL and Wateen customers, who are suffering down time for days – but there is no one to hear their pleas. And look at PTA, its securing its account so bluntly but no rule or policy for customers.