The SEA-ME-WE 4 cable linking Europe with the Middle East and South Asia was cut on Wednesday, 14th April in the Mediterranean Sea.

It became inoperable due to a “shunt fault” approximately 1,886 kilometers from Alexandria towards Palermo, Italy in the S4 section of the cable.

A shunt fault occurs when the submarine cable insulation becomes damaged and a short circuit occurs when it comes into contact with water. While repairs are underway it is likely that the outage will take a further 4 days at a minimum and might take up to 10 days depending on weather and sea conditions. 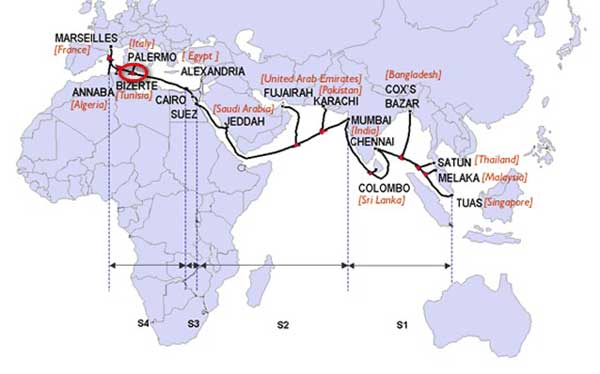 Until today, SEA-ME-WE-4 was operating with limited capacity, however, today starting 12 PM Pakistan Time, all west bound traffic from Egypt onwards has been shut down.

Meaning that all traffic to Europe and US (from Pakistan) may face higher latency – but not the blackout due to redundant/alternate pipes available for usage. Though they cost extra to service providers because of shift of all traffic load to secondary pipes.

In a telephonic communication a Transworld official told ProPakistani that Transworld has bought additional capacity, worth millions of dollars, for eastbound routes, initially landing at Singapore via Japan to United States and then to Europe.

This will increase the route distance hence the latency, but traffic will not be impacted at large, said the official.

Transworld and PTCL are only operators selling international voice and data traffic in Pakistan.

Transworld, that is a sister concern of Mobilink and a project of Orascom has 40 percent market share in Pakistan for International traffic, with major operators such as Wateen, Worldcall, wi-tribe, Neyatel etc on its network.