SMS based electoral system, a self explanatory idea was first proposed at ProPakistani, where Jabran rafique, in detail, explained this revolutionary idea on how can we make this into practice.

To review in a nut shell, the idea was to develop a voting system for elections that will work via SMS service, where the CNIC number of the voter will be used to get his/her identity via NADRA.

Working on the similar grounds, Imran Khan, Chairman PTI (Pakistan Tehreek-e-Insaaf) has filed a constitutional petition in Supreme Court, whereby he proposed Election Commission to introduce electronic voting machines. One may opine here that it is different thing as compared with the SMS Based Electoral System but the sole purpose behind the idea is same.

To make the system more efficient, clean and bogus free, voter is to be verified via National Database and Registration Authority (NADRA) using the electronic system to make the vote casting process, as cleaner as it can be.

The idea was well explained through the following flow chart, on how a voter can be identified as well as verified from NADRA so that once he has casted the vote, he is not able to vote again and only exact and accurate number of votes may be counted for the results. 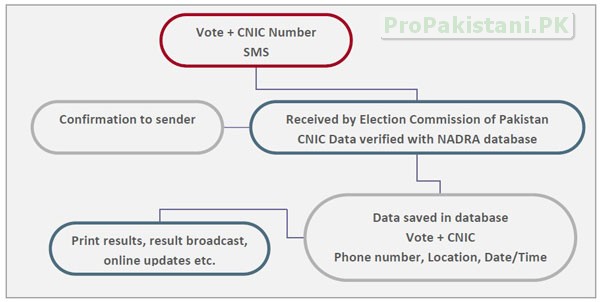 The petition is filed under the Article 184(3) through advocate Hamid Khan, where he prayed to direct the election commission of Pakistan to introduce eltronic rolls, which will help in making the system white as well as efficient.

He prayed that the new electoral rolls should be introduced in a manner that should include the name of voter in such electoral area wherein his address mentioned on the CNIC exists.

Imran Khan further stressed on the importance of this system by arguing that photographs of the voters should also be included in electoral rolls in the future elections as well as praying that the election commission should take into account the following points:

On a personal note, this system, in doubt, has many fruitful outcomes as well as the eradication of different kinds of frauds and mishaps but one point that may lead the idea to the “files” is that in an under developing country where load-shedding is a big problem, these machines may face electricity issues in some areas, though can be overcome using the generators and other resources but huge capital is required to implement the system.

Whereas the idea, earlier given, SMS Based Electoral System is much easier to implement and is more hassle free.