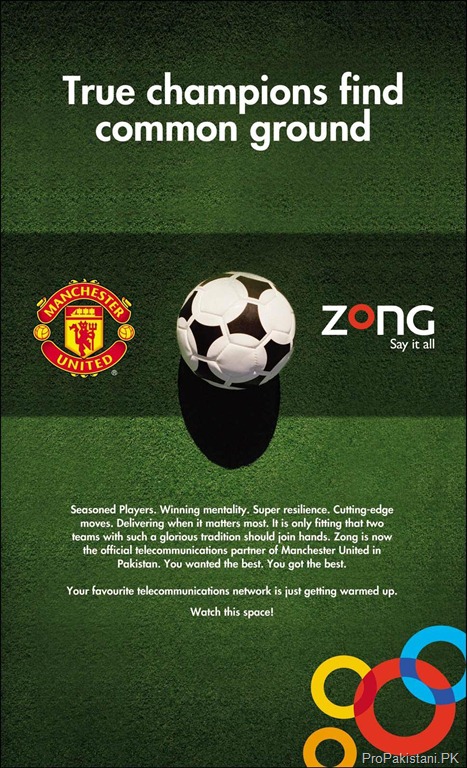 We are told by sources that Zong has decided to go to the next level by singing an exclusive deal with Manchester United, one of the top football clubs in the world.

this will be first ever deal from any Pakistani corporation with a globally recognized football brand, such as Manchester United.

Though we are unclear about the particulars of the deal at this point of time but sources inside Zong tell us that that Zong is planning something big by the end of this month, something that has never been done before in Pakistan.

It is anticipated that Zong might bring an unending loop of packages/services to use this deal with Manchester United to target millions of MANU fans in Pakistan – and probably abroad too.

This is a developing story, and we will keep an eye on the situation to update you as soon as we get hold of any thing further.

Zong has published following ad in today’s papers confirming that it has partnered with Manchester United and has become the official telecommunication partner of the football club in Pakistan.

Print ad isn’t revealing anything else, but as we mentioned above – it is anticipated that Zong is all set to bring in a complete line of services/products based on this deal with Manchester United.

All this is scheduled to happen before the end of October 2011.

Check below the print AD: 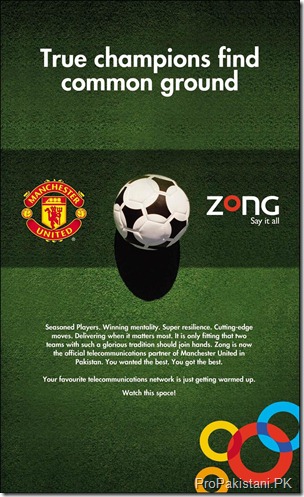