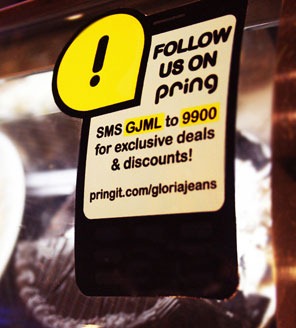 The Pakistani startup Pring we wrote about last year has come a long way with more than 3 million mobile users and now sending a staggering 12 million SMS everyday.

It’s founder Muhammad Nasrullah tells me that Pring grows everyday by 8,000-15,000 users in Pakistan. Their growth has principally been via word-of-mouth with friends inviting friends.

Just in case if you aren’t familiar, Pring works in a simple way: to get updates from ProPakistani, simply SMS follow propakistani to 9900.

This is a way of following a friend/brand or a celebrity that has a Pring account. So if you send an SMS to 9900 with “follow propakistani”, you will start getting updates via text messages from us, and that’s it.

Users can also comment by replying via SMS, which will appear on the web. Anyone can create a profile and anyone can follow accounts on Pring.

Pakistan recently crossed 20 million internet users but it is still a small number as compared to 108.9 million mobile subscribers, and this is where Pring hopes to capture the market.

"Social networking is the most important way we find news and discover new information. It shouldn’t be limited to just a few users with internet access. By enabling social networking for any cellphone in Pakistan, Pring makes information accessible to any Pakistani" says Nasrullah.

"SMS has become most important communication medium in the world. There are 4 billion mobile users (and 1.6 billion internet users world-wide), but there is no social network that does a good job of catering to these billions of mobile users. Unlike Twitter, SMS users on Pring are not second class citizens."

Does this mean Pring is a Social Network for the Poor? For users without access to the internet, without a smartphone?

"No. A Social Network like Pring cannot exist in isolation, that is why we integrate with Facebook and Twitter. It is important to understand that people at the top of the pyramid with access to internet and television generate lots of information because of their means. Whereas the people at the bottom of the pyramid consume more information because they lack access. For free flow of information, Pring caters to both. So, if you’re an internet user, you can join Pring without a cellphone. You can join via it’s website and it is absolutely free." says Nasrullah.

When I asked about the business sense of Pring and how they intend to make it profitable, Nasrullah said that they don’t plan to make money by charging end users. In fact he was determined to make Pring as much free he possibly can.

To keep things rolling, Nasrullah intends to generate revenues with advance tools for business such as Data Analytics, Sentiment Analysis, Mobile Coupons, PoS Tools, User Feedback, Polls etc which help in their commercial decisions and planning. “Pring is doing well in this front by working with notable brands”, he added.

Here’s a selected list of brands and organizations doing business with Pring:

Talking about the future of Pring, Nasrullah tells us that their plan is to make Pring the largest Social Network in Pakistan. They want everyone to go mobile without any barriers. “The world deserves a better, all-inclusive mobile social network”, he concluded.