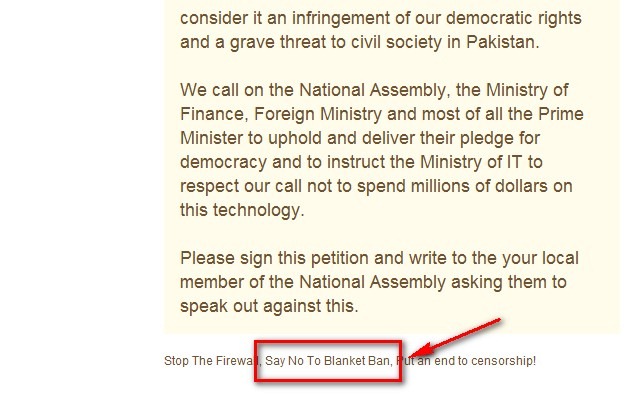 Recently there has been a lot of talk about the apparent GREAT FIREWALL OF PAKISTAN. A specific group of people have been making noise over this issue and spreading a propaganda which is based on half truths and public misinformation.

The propaganda that has been spread all over social media is that Pakistan is going to be installing a blanket Internet Blocking System and that would kill off all our internet freedoms. The picture that these people have been painting is that, if this happens, it would be the end of the freedom of speech in Pakistan.

And as always naïve Twitterati and Western media have jumped on this bandwagon and started attacking Pakistan over this. This post aims to set the record straight and list all the facts for everyone to read.

Throughout this post I will explain the whole issue and let you reach your own conclusions and realize how a few people use such issues for personal fame and gain by just misleading the masses.

For instance, have a look at a screenshot of online petition they are asking people to sign, it specifically is saying: Say No to Blanket Ban. 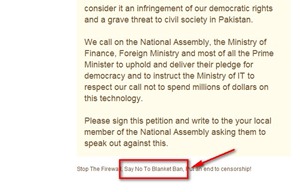 Before we go in to details of things, let me explain how censorship currently works in Pakistan. The process is that if there something that needs to be blocked i.e. offensive material of any sort, a request is sent by the Pakistan Telecom Authority to the Internet Service Providers (ISPs). The ISPs then manually block that URL/web address so that it cannot be accessed on their service.

ISPs spend manual labor doing this and do it on an individual basis. As a result of that sometimes things slip through the cracks i.e. while most websites that need to be blocked are blocked, a few sites might remain open on some ISPs.

ISPs are supposed to comply with the PTA block lists, otherwise they face fines. So instead of doing this whole process manually and individually, the ISPs sat together and thought that they could get a program made that would automate this whole process.

Currently each of them does this individually and manually. But if they were to get the whole thing automated, it would simplify their lives and save everyone money too. So in effect, the decision to AUTOMATE the URL BLOCKING and FILTERATION was a matter of long term convenience.

As ISPs are members of the National ICT R&D Fund (the money for the fund comes in form of donations from the ISPs as it is part of their licensing agreements with PTA), they requested the National ICT R&D Fund to float an RFP for such a system to be developed by local manufacturers. The intention was that given an automated system is needed, might as well get it made from within the country, this way it would create jobs and improve the capacity of local security software producers.

But once this RFP got published, all hell broke loose for the naïve pseudo activists. Reading this advert in the newspaper, a small group of individuals, who make their living by making noise about such things, picked up this issue and went with it without actually investigating it.

So began the series of tweets and press releases encouraging ‘International Firms’ not to apply for the RFP. The starting propaganda was that ‘International Firms’ should not help Pakistan become a China like censorship state. Had any one of them bothered to study the actual RFP in detail, they would have realized that it was supposed to be a completely indigenous creation that was to simply automate the manual system currently in place.

Plus this would have created jobs in the local market, but none of these so called activists bothered to mention these points. So in effect not only did these people actively encourage foreign firms not to invest in Pakistan, they also made sure local jobs are not created by local firms.

Moving onwards, the myth being spread online and elsewhere is that this sort of a system would block internet for Pakistan (check screenshot above). This is a blatant lie, as I have explained earlier; the RFP is simply for automation of the existing censorship system so that it saves time and money for the ISPs. Nothing new is being added to it and nothing is being taken away from it, no new censorship policies or agendas are being made a part of it.

It is simply good old fashioned automation. And yet this is exactly what is not being talked about. People are talking about blanket bans, limitation of net freedoms and violation of freedom of speech. But no one is stating the hard facts that none of these things would be hurt because if that were true, all this would be happening right now as well when the system is being run manually.

The fact is that like every other issues these pseudo intellectual naïve activists take up; they have made a joke out of this as well. What started out as an effort to create local jobs and build local capacity, is now being demonized by people who did not even bother to do their own research.

Our ISPs could have simply bought software that fit the bill from abroad but they chose not to. For that they are being punished by a bunch activists who are also giving Pakistan a bad name internationally in this whole process.

So before you become a victim of misinformation by these people, please investigate on your own. Read the whole RFP here (http://www.ictrdf.org.pk/RFP-%20URL%20Filtering%20&%20Blocking.pdf) to see how you have been duped by a certain lobby on this issue.

Having said this all, these activists could have reached out to ICT R&D fund (if they indeed want to serve the country and community) to ask for transparency. For instance, they could have demanded a public list to be maintained of blocked websites with reasoning plus a review procedure if someone wants to get a particular website unblocked (if he/she believes that it was blocked mistakenly or unreasonable).

I at least hope they don’t want blasphemous content to go on-air, hence won’t mind filtration of such kind, for which an automated system was required.