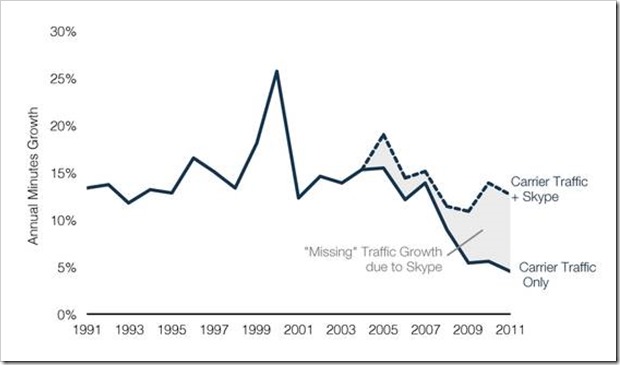 In the article “SMS Traffic On Decline”, we discussed how the advent of easier, fun-to-use and free point-to-point messaging applications can provoke a steep fall in SMS traffic generated. With a similar eye we will now analyze how is the voice traffic doing with telecom operators looking to adopt fast data technologies.

The global decline in voice shares, although, has little fraction in Pakistan, but it does hint about the future. Operators might fight even more to capture the maximum voice share if they wish to stay mast to their CS networks.

As reported by TeleGeography- a telecommunications market research and consulting firm, the international long distance traffic grew 4% in 2011 and hit 438 billion minutes. This however, was, less than one-third of pre-skype era growth rate rate, that is 13% on an average. That shows a staggering decline! The question is, where have the minutes gone? Amazingly, the decline in voice minutes correspond to a soaring and roaring growth in the Skype’s cross-border traffic.

The simple voice application which, earlier this year, pitched-in with Facebook to offer video calls has become one of the mainstream sources of long distance as well as conference communication. From corporate industry to news reporting television channels use Skype for their official and non-official communication.

Skype applications are available for all smartphone operating systems and can be thus utilized with speedy or non-speedy data connection for voice and video calling. In the telecom world particularly, international recruiters include their Skype IDs in signatures to facilitate the assessment process.

Given the big numbers shared above, if it all continues even at the current rate, mobile operators will soon have to run stealing for international voice traffic, prices of which have dwindled significantly in Pakistan at least.

Its only the matter of time (and smartphones to get popular in Pakistan) for local market to follow the global trend.