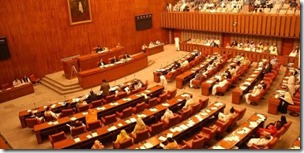 Political leadership of the country has opposed recently implemented International Clearing House or ICH that has risen the call tariffs for incoming calls to Pakistan from 300% to 800%.

Treasury legislators belonging to the PPP, PML-N, PML-Q and Muttahida Qaumi Movement (MQM) said some officials of the Cabinet Division were behind this decision and warned that the foreign exchange inflow would be depleted by the tax

MQM staged a walkout from the Senate over imposition of tax on incoming international calls while other parties in the House called for its withdrawal.

Terming the tax on overseas calls injustice with Pakistanis residing abroad, the senators demanded the immediate withdrawal of ICH to normalize the incoming tariffs. MQM’s Senator Tahir Hussain Mashhadi said the increased tax was a form of extortion and that his party would continue the walkout until it was withdrawn

The decision, he said, was taken by the Pakistan Telecommunication Authority (PTA) when some LDI providers convinced the authority. They later got approval from the Ministry of Information Technology.

“The world is moving towards free phone calling, while Pakistan is enhancing the rates; it is regrettable,” he maintained.

Speaking during the session, Pakistan Muslim League-Quaid’s Senator Kamil Ali Agha said that remittances by overseas Pakistanis had already dropped by 10 percent, and the tax on incoming international calls would lead to a further decrease in remittances, which are backbone of the Pakistan economy.

Leader of House, Senator Jahangir Badar said the new tax was imposed by the Ministry of Information Technology after obtaining approval from the prime minister. He said it would curtail grey trafficking in the telecom sector and would also bring in revenue of $500 million every month. Main purpose of the imposition of the tax was to bring parity in call rates, he claimed.
Leader of Opposition in Senate Ishaq Dar said the leader of House, who represents the prime minister, agreed with the call-attention mover, which meant that there was no clash on the issue and the tax should be withdrawn.

Civil society is also opposing the ICH and has urged Chief Justice of Pakistan to take suo moto notice of the issue for the sake of general public.