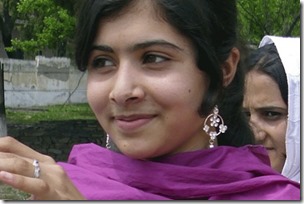 Pakistan Telecommunication Authority has issued a directive to internet service providers to block the access of at least 10 URLs in Pakistan that were allegedly involved in publishing propaganda material against Malala Yousafzai, we have confirmed with sources.

At least three ISPs confirmed ProPakistani about the blockade orders from PTA and have consequently blocked all the mentioned websites, mainly a blog called “American Everyman”, run by Scott Creighton.

Other URLs, that were blocked, are forums that had re-published the stories appearing on “American Everyman”.

“American Everyman” (http://willyloman.wordpress.com/) has various blog entries about Malala Yousafzai, the 14-year girl who was shot in the head by a Talibaan operative for preaching education for girls in Swat.

Scott Creighton, in his blogs, tries to raise questions that lead to suspicion that America has alleged role in attack on Malala for achieving various goals, mainly related to war against terrorism. Scott terms the attack on Malala as a staged incident.

PTA Spokesperson didn’t confirm ProPakistani of the government’s directive for blocking website or the reasons for the blockage and said that she isn’t aware of any such thing. She, however, promised to revert back as soon as she gets hold of anything on this.

A PTA spokesperson called in to clarify that regulator is just following orders issued by Ministry of Information Technology, which keeps on sending such directives (of blocking websites) to PTA for implementation on almost daily basis.

PTA said that reasons for the blockade of up-mentioned websites are better known to Ministry of Information Technology and PTA is  just implementing orders issued by the Ministry.