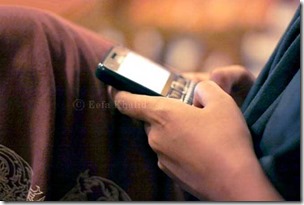 Islamabad High Court has reportedly dismissed a petition filed by cellular companies against ban on night packages and Mobile chat services, after petitioners withdrew their request in court.

According to Dawn.com, Mobilink, Ufone, Telenor, Warid and Zong requested the court to allow them to withdraw their petition after Pakistan Telecommunication Authority submitted its reply along with some transcripts of mobile call recordings it had intercepted during late-night conversation of consumers.

This is the first time that Pakistan Telecommunication Authority has publicly admitted that it recorded private mobile conversation of consumers, and ultimately made this record public by presenting it in the court.

PTA’s counsel was quoted as saying:

It merits mentioning here that mobile phone companies are bound to give federal government the access to voice call and SMS content in the interest of national security.

Federal government, according to the telecom act, can give this access to a person or an organization to intercept voice and SMS conversation for national security.

However, intercepting private conversation of night callers – who aren’t involved in a chargeable offense – doesn’t come under national security, opines a legal expert while speaking with ProPakistani. ”Making this conversation public is utmost invasion of privacy of cellular consumers”, the expert said.

Telecom companies, when asked by ProPakistani, said that this is something which comes under PTA’s responsibility to use the access to system in interest of national interest only. “Cellular companies are not responsible for regulator or government’s acts”, said an official of a telecom company.

PTA spokesperson, when contacted, asked for time to respond to our query. We will update this story when and if we get any words from PTA.