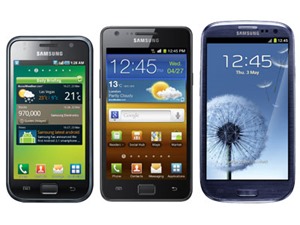 That’s it. The wait is over. The Galaxy S IV will be released tomorrow so here we take a look back at the journey so far and see how has the series fared with the fans and reviewers alike.

The original Galaxy S was the successor to the Galaxy i7500, a phone already forgotten in the pages of history. Samsung had learned from its mistakes and Android’s nurturing led to the making of the Galaxy S, marketed as the best Android ever. It was also one of the bigger phones of the market with a 4 inch display compared to the 3.5 inches of the iPhone 3GS and 4 & HTC Desire and 3.7 inches of Google Nexus One. The very next year Samsung decided to do something even bigger and the result was the (even bigger) Galaxy S II. Featuring a 4.3 inch screen, it dwarfed the iPhone even further and was an improvement over the Galaxy S in every way.

The Galaxy S III announced next year wasn’t as big (because the bases were covered), but further set the benchmarks of the entire industry. It is still, so far, one of the highly respected phones to have been released over the past one year. It also featured a lot of clever software tricks absent from the previous models of the series.

The Sales and Success

Samsung released the sales figure for the Galaxy S series earlier this year. As expected the Galaxy S III and S II were leading with  40 million sales each. The original phone scored figures of 20 million. Every new phone released has quickly overtaken the sales of the previous phones of the series. The Galaxy S IV is expected to break the records of all of them.

Its in the (ever-increasing) size

Samsung has always been ahead of the whole market when it comes to sizes. The original Galaxy S featured a market-leading 4 inch display. Galaxy S II further increased it to 4.3 inches. It was the Galaxy S III however which blurred the lines between the Smartphones and pallets with its giant 4.7 inch display while still being pocketable. The Galaxy S IV is expected to be released with a 4.9 inch display which is larger than all.

Resolution also plays a role here. The first two phones of the series had resolutions of 480 x 800 pixels but the Galaxy S III upped that up to HD. The fourth phone of the series is expected to be released with Full HD resolution and there’s no doubt that it wouldn’t.

As expected, this is the moment everyone in the smartphone industry waits for. The Galaxy S IV going to be released tomorrow and will most probably set the new benchmarks for the entire industry, taking the responsibilities from the Galaxy S III. Just like the Galaxy S III, it will be launched with all those (and even more) software goodies. A bigger screen with higher resolution, better camera, even beefier hardware and a richer list of connectivity options.

The design of the phone might be made of plastic though, which a lot of people hate but no one’s expecting it to change either. But who knows what will happen?

Whatever the scenario is though, we are almost sure that there won’t be any compromises and even if there are, you’ll have to learn to deal with them.