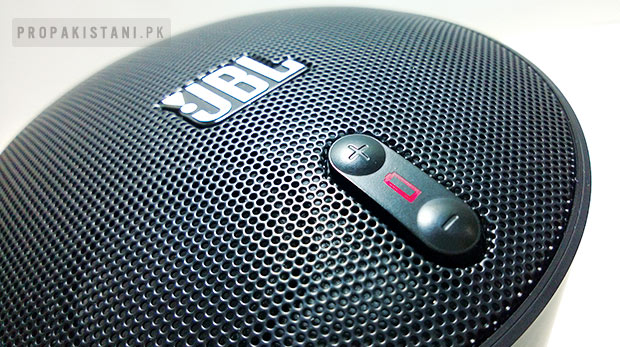 Last month Nokia officially launched 3 new Lumia smartphones 920,820 & 620 in Pakistan. During the launch, Nokia had also introduced some great accessories for the Lumia lineup and today we are going to present a brief review of JBL PlayUp, a portable NFC enabled wireless speaker.

What’s inside the Box? 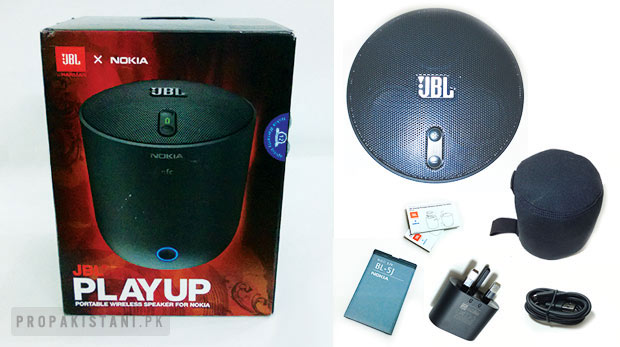 JBL PlayUp is the successor to Nokia Play 360 Bluetooth speaker, which was introduced last year. PlayUp is a cylindrical, top-shooting speaker having plastic body with a rubberized finish. The rubber material feels premium but its fingerprint and smudge magnet, and there is no easy way to remove them – especially if you have got the black version. 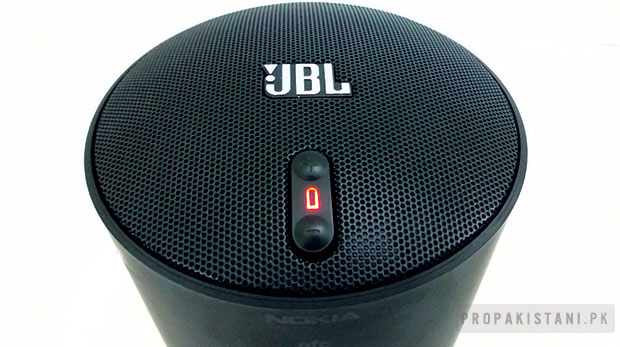 On the top we have the speaker protected by a metallic grill and JBL Logo in the center. The top also contains volume rocker keys with battery indicator, which turns red when battery is low and green when battery is full.

At the front, on top we have Nokia logo with an NFC indicator, this is where you have to tap an NFC enabled device to make an instant connection. Actually you don’t even need to tap it, just keep your phone close to it and the devices will pair itself automatically.

JBL PlayUp is optimized for Nokia Lumia devices, but you can also use any other NFC enabled device with it. You can always connect via Bluetooth if your phone doesn’t offer NFC functionality. This way you can connect it to your PC, Laptop, Tablet or any other device. But if your phone or any other player lacks Bluetooth you can also connect using a standard 3.5mm audio wire, which is hidden under the battery compartment cover. 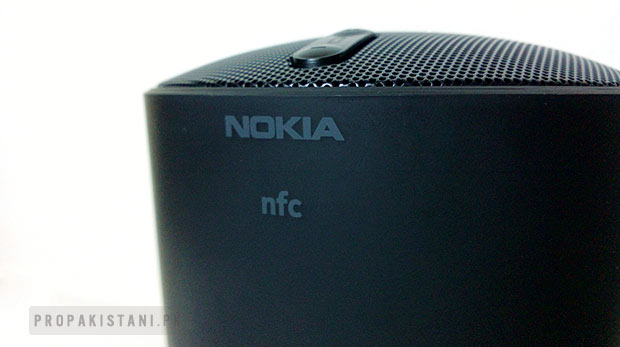 On the front bottom there is the Bluetooth button, which has a light circle that glows blue if paired and white if there is no Bluetooth connection.

At the back, there is a 3.5mm audio, a microUSB port for charging, and a power button to switch it on or off.

Along the side there is a hole, which serves as a woofer as well as an air duct. 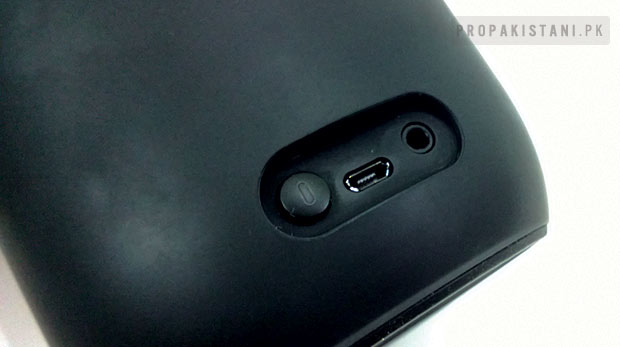 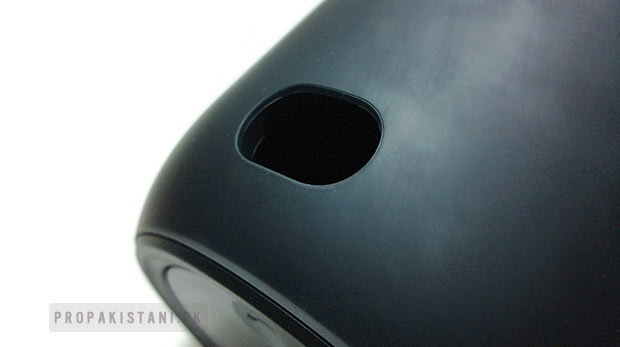 On the bottom there is the battery compartment, PlayUp uses Nokia BL-5J battery, which can be easily replaced and can be charged via USB port. The audio wire is also hidden in the bottom cover.

The JBL PlayUp has a maximum output of 89 dB, considering the size of this speaker the sound is very loud and clear. With the 360 degree all-around design, it produces enough sound to fill a medium sized room with no problems, it also has a bass reflex chamber that helps make sure the deep tones are richer.

The battery gives almost 10 hours of playback and the Bluetooth range is about 10 meter. 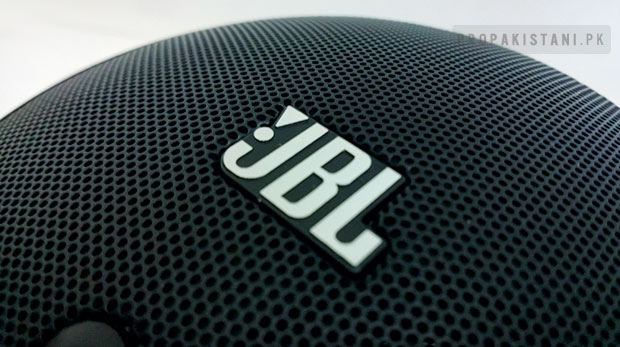 The NFC tap thing is not as fast as we expected and it takes almost 2 seconds to pair up and play the sound, also when you power off the speakers the volume level automatically reverts to the lowest and next time you have to use the volume rocker to set it to a higher level.

PlayUp does not have a microphone built-in, so you can’t receive calls over the speaker. If you are playing music and someone calls, the speakers will mute the music and after you finish the call the music will start playing again.

JBL PlayUp is available at selected outlets all over Pakistan for a price of Rs. 17,500. It comes in Black, White, Yellow and Cyan colors with 12 months Nokia warranty. 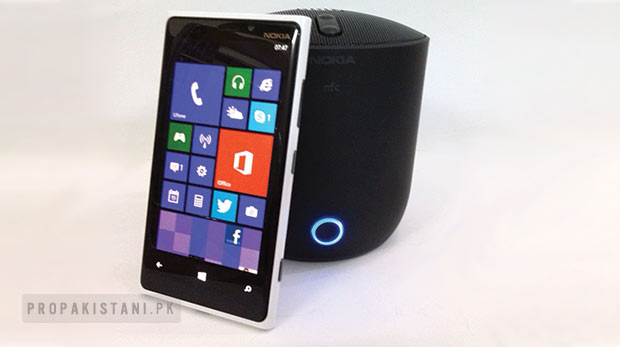 JBL PlayUp is a great portable speaker, with no messy wires. The sound quality is very nice as compared to its size and battery gives a solid 10 hours playback.

JBL has a good track record when it comes to its audio equipment and the brand is famous all over the world, though it’s a little costly – but if you have just bought a Lumia device and looking for some cool accessories, JBL PlayUp is worth a try.