Warid Telecom has extended its outreach to Pakistani graduates studying in the UK by participating in a British Council career counselling initiative.

Warid’s participation not only allows them to provide career guidance and advice to Pakistanis studying at British universities, it also allows these students to seek job opportunities as prospective Warid employees.

Warid had previously engaged students in Pakistan through participation at major job fairs in leading educations across the country, including LUMS, IBA, FAST, NUST, UET, UCP, and Superior University. This British Council initiative has allowed the telecom giant to build strong ties with top UK universities, as well as harness the intellectual potential of the Pakistani student population in Britain. The initiative also assists in providing better networking opportunities and stronger trade ties between Pakistan and the UK. 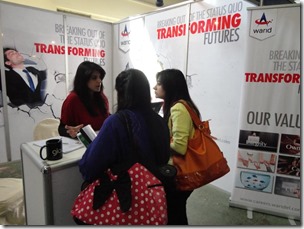 Commenting on the initiative, Mr. Ali Raza Mehdi, Vice President Human Resources & Administration at Warid, said, “This initiative by the British Council has allowed Warid to reach out to the large Pakistani student community studying in the U.K providing valuable insights to these students in career management, enhancing employability skills and also potential placement guidance not only in Warid Telecom but also in the talent market in Pakistan.”

In addition to participating in the British Council sessions in Karachi, Lahore and Islamabad, Warid has been holding regular career counselling sessions at some of the leading universities across Pakistan. Some of the recent mentoring sessions were held at Lahore School of Economics, IBA Karachi and LUMS.