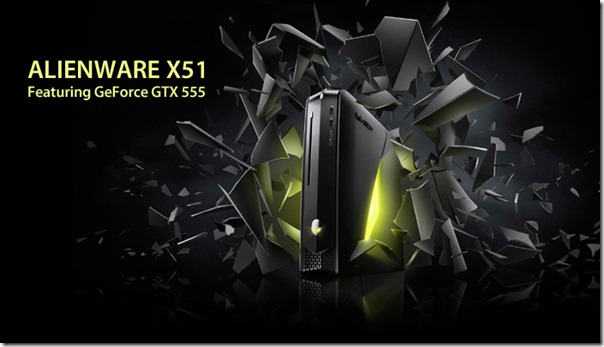 A while back we talked about the Linux running budget All-in-One PC by HP. Now Alienware, one of the more renowned gaming PC manufacturers, has come up with their first Linux running gaming PC ever. The new X51 desktop PC costs $599 and is available right now.

The X51 has a 3.3Ghz Intel Core i3 processor, which although weaker than i5 and i7, is still capable of handling stuff. The amount of RAM is set at 6GBs. A 1GB NVIDIA GeForce GTX 645 graphic card and 1TB of hard drive storage are there too. The desktop runs on Ubuntu 12.04 LTS. The unit itself is 12.5 inches high and 12.5 inches long. There’s an optical drive in the pack as well.

Now obviously, with Linux, you won’t be able to take complete advantage of the gaming hardware due to a desperate lack of gaming titles. Currently there are 25 titles available on Steam, the popular gaming platform but many more are on their way and compared to that Windows’ gaming library is light years ahead.

However, there is a Windows 7 running equivalent of this desktop too but unfortunately that costs a full $100 more than this system. Another solution though, which most people will find a lot more attractive is to uninstall Ubuntu and put Windows on the PC yourself and enjoy the latest gaming titles. Given the fact that Windows’ gaming library is outrageously large (and Ubuntu’s ridiculously small), true gamers will mostly find this route to be the best.

As more and more Linux-based systems have started to come out though, it has started to become clear that the OS isn’t a small, worthless thing in the PC industry anymore. In fact, If the customers get interested, we might even be seeing a new revolution in the PC industry, but its just too early to predict anything right now though.