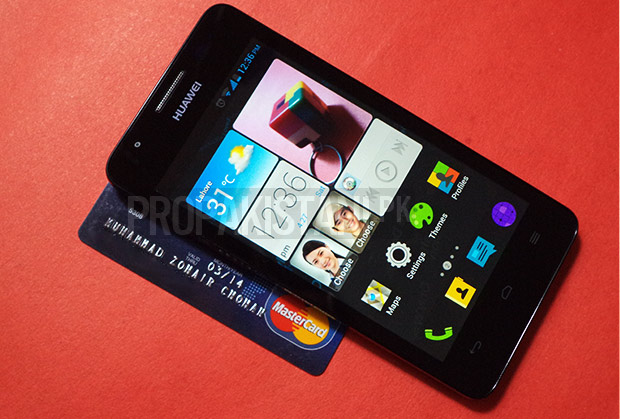 After announcing Ascend Y300 — a low end android smartphone — the Chinese company has recently introduced yet another budget android device Ascend G510 in the Pakistani market.

Ascend G510 was planned for a launch earlier this month, but due to the increase in taxes on mobile phones, company had to delay the launch for couple of weeks.

Just to mention, Huawei did a promotion on its official Facebook fan page, where customers pre-ordered Ascend G510 for a price of Rs. 14,700 and entered in a lucky draw to win 2 Dubai tickets. This promotion has now ended and orders are being shipped, though the winners of Dubai tickets are yet to be announced.

Now getting back to review of Ascend G510, check below the un-boxing and hands on video — before we go in detail review of the phone: 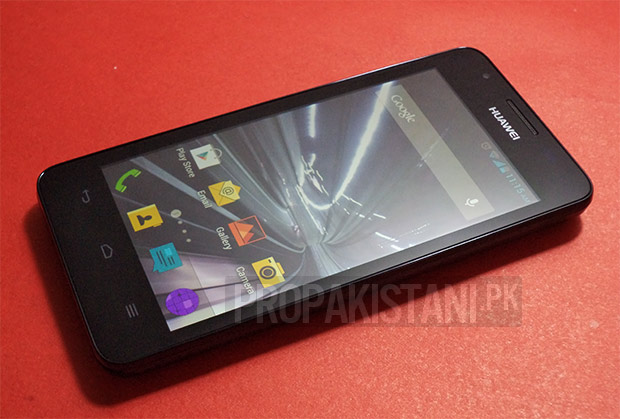 Ascend G510 follows the same generic smartphone design, found in nearly all devices launched by Huawei this year. In terms of design this phone is actually the bigger brother of Y300. It has slightly rounded corners just like Y300, and a total plastic body, but the rubbery feel is now replaced with gloss finish. 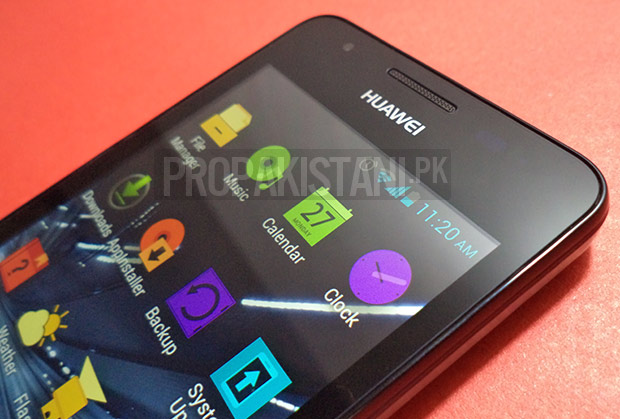 The phone dimensions are 134 x 67 x 9.9mm and it weighs around 150 grams. The textured cover makes it comfortable to hold but due to the glossy plastic it’s a little slippery.

Ascend G510 is equipped with a BIG 4.5 inch IPS touch screen, which is quite unusual for phone in this price range. The screen offers 854×480 pixel resolution with a pixel density of 218 ppi, still the images show quite vivid and sharp. Sadly the lack of Gorilla glass makes the screen vulnerable to scratches, So you will have to take extra care of the screen or even better if you use a screen protector. 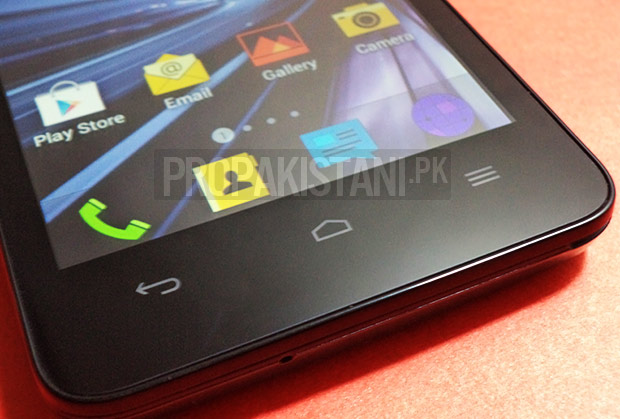 Above the screen there is front facing camera, ear speaker, light sensors and notification LED. Below the screen we have three touch sensitive keys; back, home and menu. 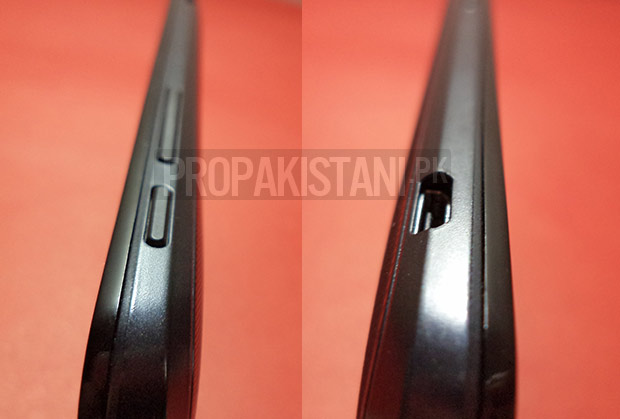 The physical keys for power/lock and volume are quite oddly placed in Ascend G510, Instead of the regular top or right side positions the power key is placed on the left, just above the volume rocker and it takes a little while to get used to these new positions.

The microUSB port is also located on the left bottom. So on the right you have got nothing. On the top left we have 3.5mm headphone jack and on the bottom there is the microphone. 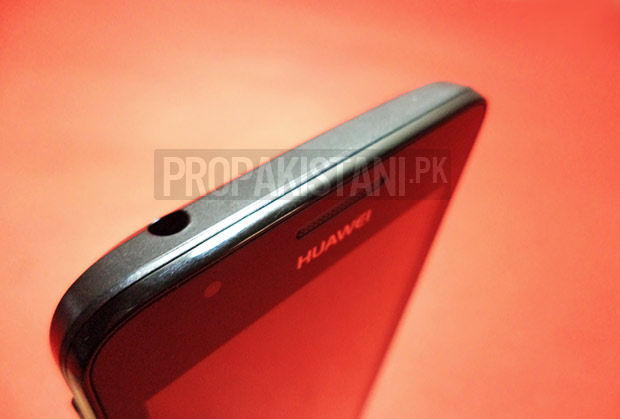 The back side of the phone is equipped with 5MP Camera, LED flash, speaker and embedded logos of Huawei and DTS. The back cover is actually not a usual cover but a complete shell. Under it we have slots for Mini SIM, Battery and microSD card. 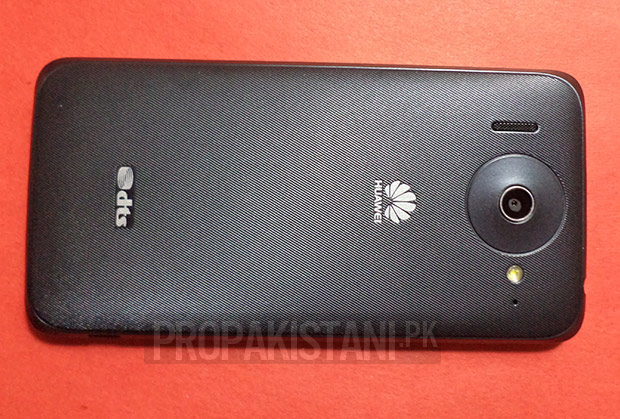 The build quality of this phone is nice, but personally I prefer the rubberized feel of Y300, which provides a comfortable and strong grip. Moreover the placement of physical keys and the bigger size makes you a little uncomfortable at first, but after some time you get used to it. 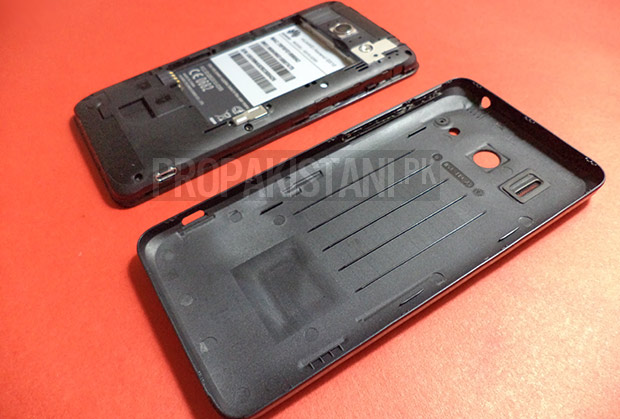 Just like its younger brother, Ascend G510  comes with Android Jelly Bean 4.1.1 out of box and on top of it runs Emotion UI, Huawei’s Proprietary User Interface. This UI provides an easy functionality for the new Android users. Personally I don’t like this interface as its not much customizable and feels bulky. 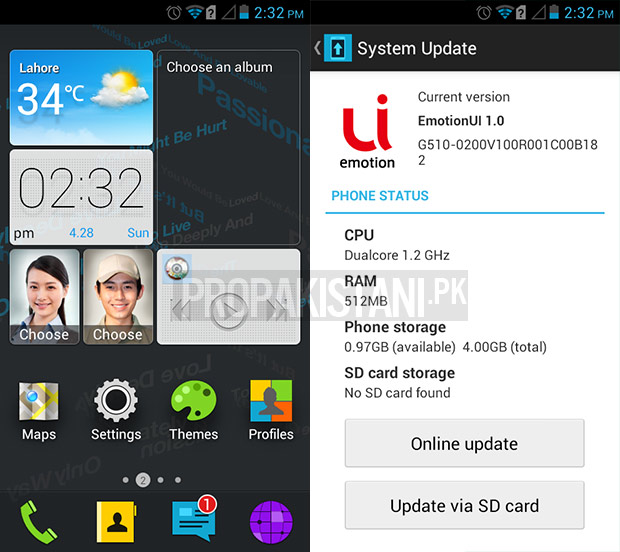 In Emotion UI there is no app drawer, and everything is on your homescreen. In total you get 9 homescreens and you can arrange and re-arrange the apps by putting them in folders. A nice little animations is shown when you swipe between screens.

You can also add the widgets by pressing and holding the screen. Huawei has also included some of its own widgets, like the “Me widget” which is a collection of different widgets where you can put your contacts, clock, music, weather and gallery widgets. 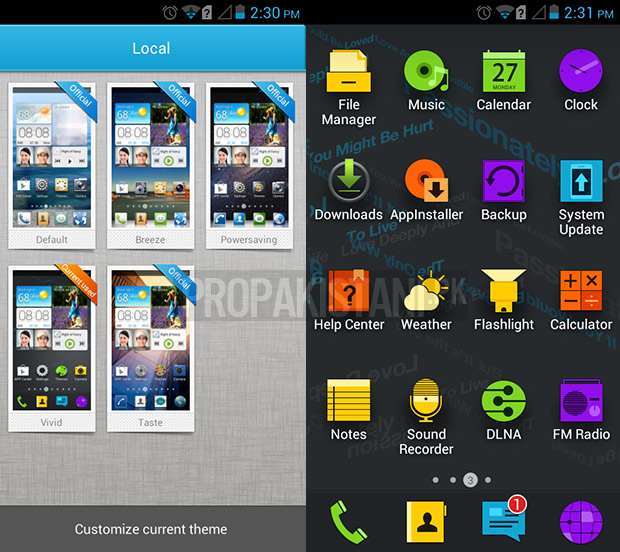 Emotion UI comes with different themes plus you can also download new ones. The notification area is also customized and there are many toggle buttons included for quick actions like turning on Wi-Fi, Bluetooth, GPS and Screenshot.

This UI also has a profile app, which allows you to select or create profiles with different sound, brightness and data settings.

By default there is no stock launcher present and the Emotion UI is your only choice. If you don’t like the UI grab some other launcher from Play store but you still can’t get rid of some of the features of Emotional UI because of it’s integration with the OS.

The company should include an option for users to get back to the stock android and turn off all the Emotion UI features, because they make the phone sluggish. However, Huawei has done a great job in customizing the OS to work on low hardware but still there is a need for improvement.

We are not sure if this phone will get any update in the near future.

Most of the devices running Jelly Bean these days have at least 1GB of RAM, but you can’t get everything in a budget this low. Still the performance of this phone is extraordinary. The Emotion UI is a little bulky and you may notice some lag while swiping through the screens but you can always install any other launcher and make things go smooth.

Games like Temple Run, Temple Run 2, Battle Monkeys 3D Multiplayer run fine on this phone. You can also play some resource demanding games like Real Racing 3 on it, but you will have to use a microSD card for game data as the phone’s internal storage is just 4GB.(See the video above for games performance).

It has the ability to play some 720p videos, but the 1080p experience is horrible. Obviously you can’t compare the performance of this phone with Quad core devices with bigger RAM and better GPU, but still Ascend G510 provides a satisfactory performance at this price tag.

VoIP applications, such as Viber and Skype, work great on this phone, and the video quality of the front facing camera is amazing. Browsing on this phone very smooth and fluid. The Fast Boot option allows you to power on the device in less than 5 seconds.

Have a look some of the benchmark results: 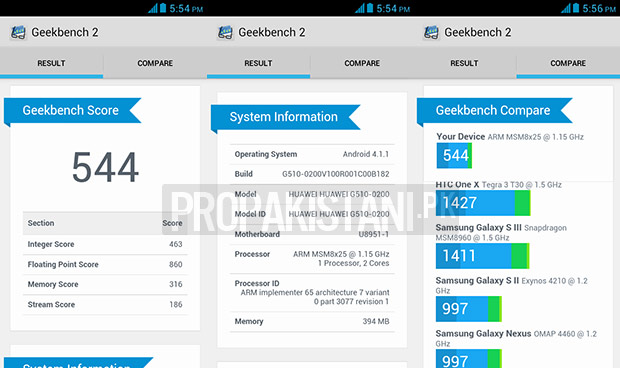 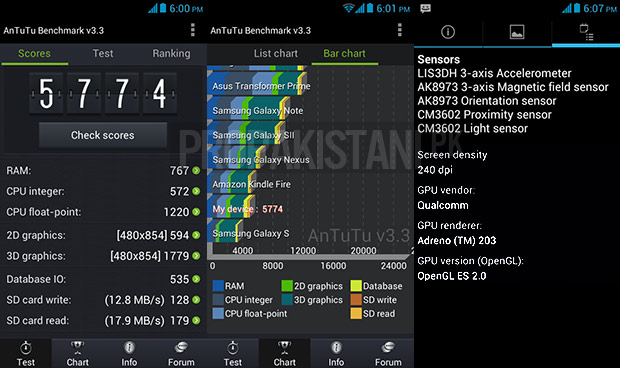 Ascend G510 has a 5MP auto-focus camera together with a VGA camera on the front for video calling. Unlike Y300 the Camera application is very quick and the LED flash light has white color.

You can’t expect much from a budget phone Camera, but Ascend G510 performs very well. The images turn out bright and vivid. The lack of physical Camera key makes things a bit difficult but the size of the phone helps to get a good image while using soft key. 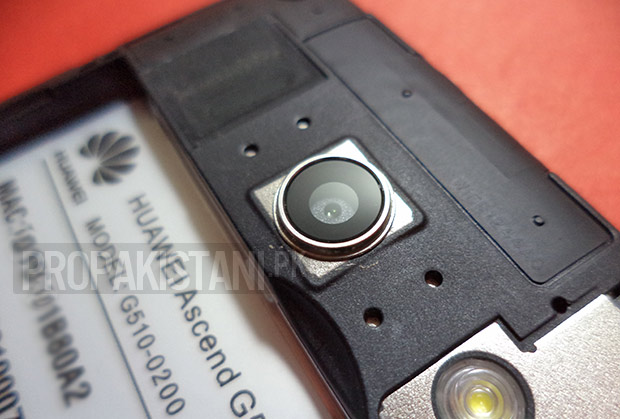 The Camera app is very basic and there are not many settings to play with. By default you can’t mute the camera sound but there are methods to overcome this issue — by rooting of course —  which will void your warranty.

The Camera only offers a VGA resolution for recording videos contrary to most of the phones available in market that offer at least a 720p video recording. Some European websites have mentioned that the versions launched there include the 720p recording feature but we were unable to get this confirmed.

Other than that there are even less settings for video. You can turn on the LED light to record videos in the dark. There is also a standalone Torch app which uses the LED.

The phone packs a 1730mAh battery, which frankly speaking isn’t enough considering the size of screen and a dual core processor. You will probably get a single day of usage after full recharge, but for users who love to browse over Wi-Fi, play games and multimedia it’s not going to last much longer.

Amazingly the standby time is much longer and you get a decent time when phone is used only for calling purpose. 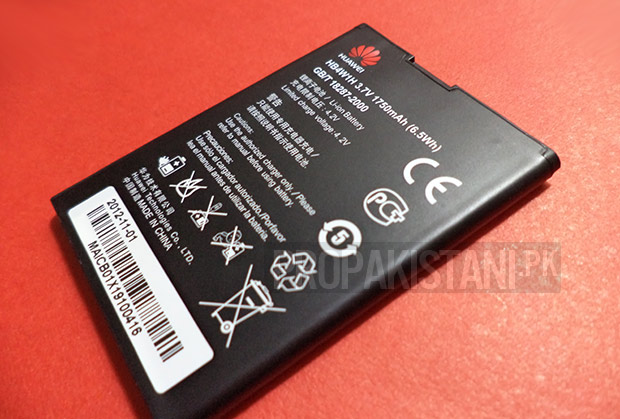 The built in battery saving app allows you to extend the life, by disabling Wireless connections and turning off animations.

The phone is recently launched in the market for a price of Rs. 16,750, after taxes. Earlier it was delayed due to the increase in taxes on mobile phones.

Just like the younger brother Y300, Ascend G510 is available in Black and White colors. 1 year warranty of Airlink Communication will be provided with this smartphone.

Usually big phones comes with big price tags, but thanks to Huawei for this budget device which is affordable yet amazing. It has a durable design and delivers a satisfactory performance. Sharp screen, Good Camera and Android Jelly Bean operating system makes the deal even more attractive. 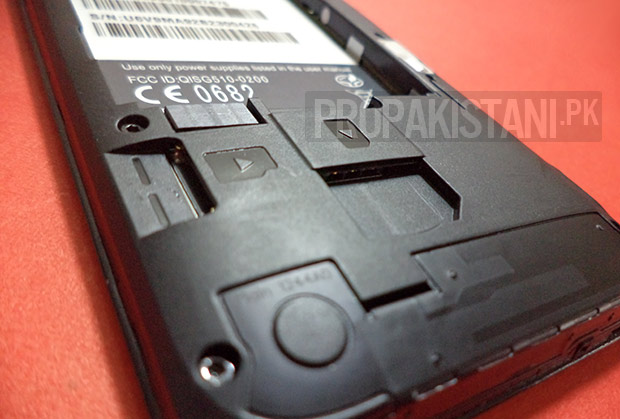 There are some setbacks like low RAM and Emotional UI but still it is a good option in this price range. Huawei should try to cater the needs of Pakistani Customers by adding Urdu support, Localized apps and Introducing Dual SIM variants of these devices.

Like always there is also a need to aggressively advertise these smartphones. Recently we saw a TVC featuring Y300 but frankly speaking it’s wasn’t up to mark and Huawei needs to do a lot better on this front. 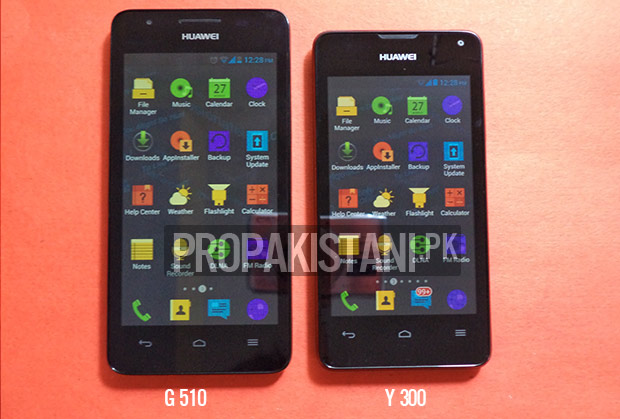