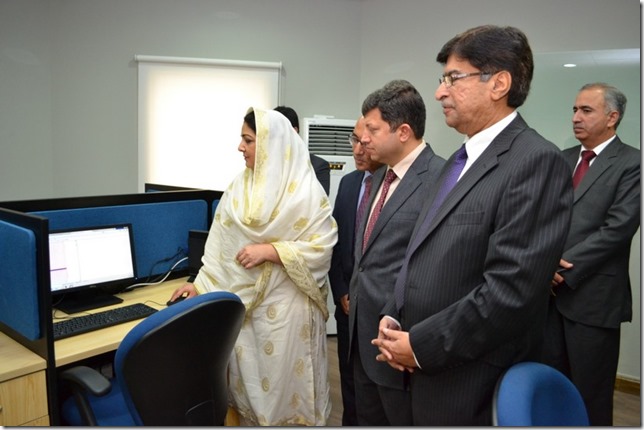 The grey trafficking monitoring equipment installed earlier this month, after formal testing, was formally launched by the State Minister IT, Ms. Anusha Rahman yesterday at PTA Head Quarter, accompanied by Secretary IT, Mr. Akhlaq Ahmed Tarar, Chairman PTA, Dr. Ismail Shah and other officials of the Authority & Ministry of IT.

Talking on the occasion Minister of State for IT, Ms. Anusha Rahman apprised the Acting Chairman about the focus of the current government to curb the menace of grey traffic and as a result where of, the state of the art equipment now in place, should be efficiently and effectively used to block all illegitimate IPs, being used for grey trafficking, causing a huge loss of revenue to the government exchequer.

Not only that the government desires to block grey traffic but also wants to ensure that all these miscreants, engaged in these illegal activities are caught, said a statement issued on the occasion.

Henceforth, in view of the above direction of the Honorable Prime Minister of Pakistan, PTA must take radical steps not only to block IPs involved in bringing in illegitimate traffic but also to set up a vigilance and enforcement mechanism, coupled with a proper call centre designated to receive complaints in this regard, said the statement.

A public awareness campaign should also be launched by PTA in this respect accordingly.

The State Minister further directed PTA to build SOP’s to verify legitimacy of IPs, those already existing on ‘White List’. Therefore, physical audit and ground verification of the particulars of IP users on ‘White List’ must be done within the next three days so as to ensure that only legally approved and verified IP list is maintained under the signature of the current authority.

Acting Chairman, PTA assured the Ministry of IT, PTA’s full support and commitment towards curbing grey traffic and that every step would be taken that efficient and transparent mechanism is deployed for producing favorable results.