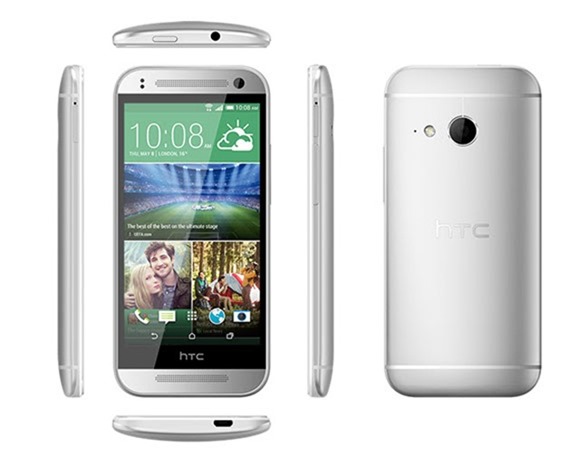 HTC has beaten Samsung and Sony in announcing the mini-flagship phone by revealing the HTC One mini 2. The phone is supposed to be the successor to the last year’s One Mini, or the miniature flagship, whatever you think of it.

The most-obvious thing shared by the two phones (One M8 and One mini 2) is the design. It is still the same gorgeous brushed aluminium with curved edges, however, surrounded by plastic at the front.

BoomSound speakers are there, however. Other aspects are less similar, though.

The screen is a smaller 4.5″ panel with 720p HD resolution, which was all expected. It is 10.6mm thick, which is a bit of a surprise but you won’t feel the thickness thanks to the curved back.

And then, the differences start. Under the hood, you’ll find a 1.2Ghz quad-core Snapdragon 400 processor, 1 GB RAM and Adreno 305. Storage is set at 16 GB, which is also expandable by 128 GB, thanks to microSD.

And the camera? 13 megapixel autofocus with Flash and 1080p video recording. We know how mediocre HTC flagships cameras are so we won’t be surprised if this one is better than its HTC One M8 counterpart. But then again, why would you use a camera with higher resolution in the mini flagship?

A 5 megapixel selfie-shooter is found at the front, which is also capable of doing 1080p stuff. Connectivity options include NFC, Bluetooth 4.0, 4G LTE, microUSB 2.0, GPS and Wi-Fi. Battery capacity is set at 2,100 mAh.

The phone will be available in June in three colours (same as the One M8). Pricing details are not known right now.

It’s quite surprising, though, how similar the display and the internals are with the Moto G (LTE Version), which will probably cost half as much.