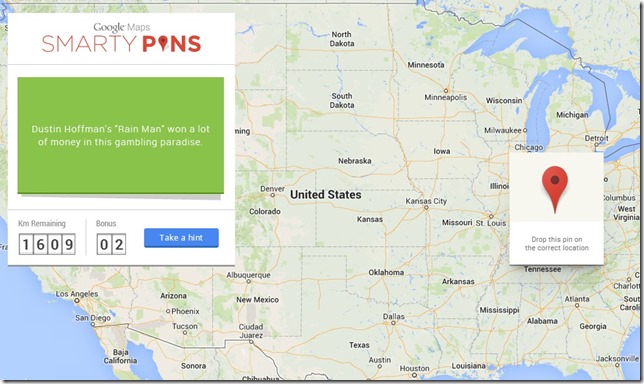 For that, it has added two new games to Maps, called Smarty Pins and GeoGuesser.

The first one, which is much simpler, judges your general knowledge skills. You’re given a question (“The mega hit song by Psy is about the entitled nouveaux-riches of which posh South Korean district?) and a limited number of kilometres. You initially start with 1609 km (or 1000 miles). You lose them with every wrong answer (more if your guess was farther from that locality) while answering them quickly will earn you rewards, i.e. kilometres.

You can choose from a total of six categories: Featured Topic, Arts & Culture, Science & Geography, Sports & Games, Entertainment and History & Current Events. The game has also a bit of humour induced into it (“Not bad Sherlock”) so expect it to get the best of you for quite a bit of time.

GeoGuesser is much tougher. You get transported to a location, and are asked to guess it on the world map. In our opinion, it is not quite as amusing as standing in a forest or a highway with the map of the world just sounds silly. Which it is.

There are a few location-specific, and (optionally) time-based, challenges which we feel most people will like.

But regardless of anything, you have to give Google credit for these nifty time-wasters. They are a bit late to the party but are welcome anyway, especially since they’re so amusing.

For sure, they are concentrated mostly in North America which makes them tougher but people will enjoy them anyway.