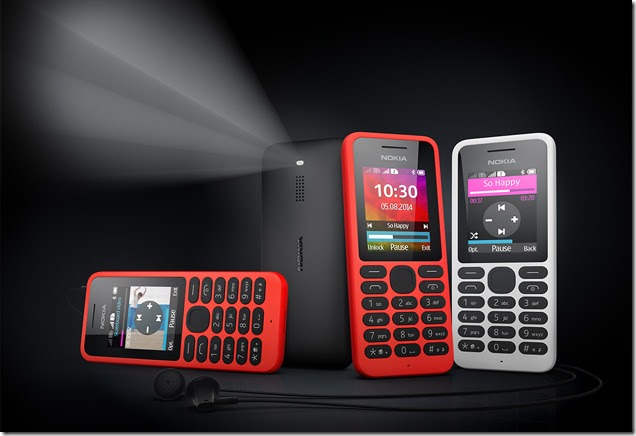 As was expected, a week ago Microsoft announced that it had dismissed Nokia’s non-Windows Phone projects in favour of the main offering. As it has turned out, however, one thing survived: the dumbphones, the reason being the fact that none of Microsoft’s current products fall in that particular category.

Showing mercy towards Nokia’s entry-level market, Microsoft announced the Nokia 130, a phone featuring a 1.8″ QQVGA display of 160 x 128 resolution, a flashlight on the back and Bluetooth 3.0.

There will be optional Dual-SIM support, meaning a separate model will come out later with another mini-SIM slot. You’ll also get the music and player app, FM Radio and a choice of 3 attractive colors (Black, White and Red).

Series 30 OS means you’ll get plenty of battery life from the 1,020 mAh cell. Nokia says it will allow up to 46 hours worth music playback as well as 16 hours of video playback.

There’s no camera, unfortunately but you can’t ask for a lot more at its price point anyway.

MicroUSB 2.0 port is onboard and so is Nokia’s trademark alphanumeric keypad. So as not to make file storage a worry, there’s also a microSD card slot with storage capacity of up to 32 GB.

Microsoft hopes to bring along the customers buying these phones to its platform in the future. “Microsoft doesn’t have any other project that can reach these consumers. These consumers will create a Microsoft account and become part of the Microsoft ecosystem,” the company’s phone unit VP Jo Harlow said.

Lastly, the official price is set at $25 for the basic single-SIM model.

The other one should cost a few bucks more but that hasn’t been an issue anyway. With the average smartphone price coming down quickly, though, things can get tough for the Nokia but should be able to give a tough fight with its strong, durable body.