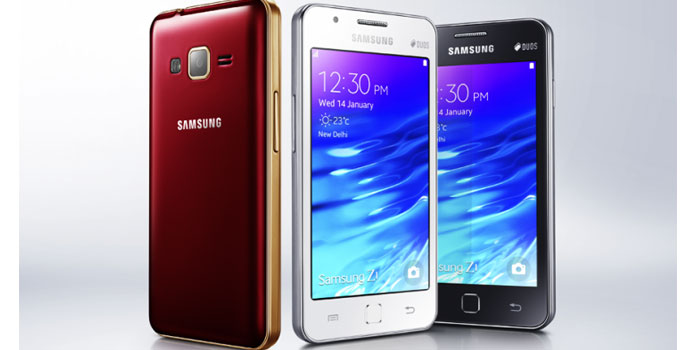 After years of development, countless announcements and several cancellations, the first Tizen phone from Samsung is finally here. The suspiciously-named Z1 lies at the bucket-end of the smartphone chain, costing just around $90 and is already available.

The design of the Z1 is nothing spectacular. Same as what you’d expect from a lower-ender, it is sturdy, made-to-last and vague. The display measures 4″ with 800 x 480 WVGA resolution. Underneath breathes a dual-core 1.2Ghz processor with Spreadtrum chipset, 768 MB RAM and 4 GB storage, expandable by up to 64 GB.

At the back lies a 3.1 mp camera with LED Flash, coupled with a VGA shooter upfront. Connectivity options include Bluetooth 4.1, microUSB, 3G and optional dual-SIM.

The OS running on the phone is Tizen v2.3 which includes the Ultra Power Saving Mode we’ve seen on higher-end Samsung phones already. Costing around $90, the Z1 is available in Black, White and Wine Red.

Not only this, the company has also promised a lot more devices including smartwatches, televisions and cameras. Watch this space.