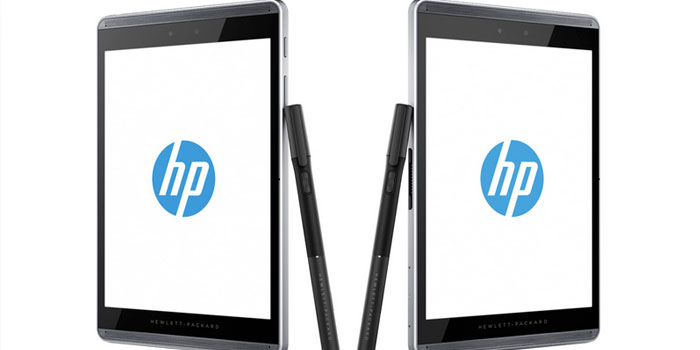 The market for bigger sized Android tablets may be nosediving but HP is willing to take its chances. Amidst the grim market performance of such tablets, it now introduces the HP Pro Slate 8 and HP Pro Slate 12. Besides offering a sizeable display, HP is billing these tablets as work units.

The 12.3-inch display of Pro Slate 12 sports a screen resolution of 1600×1200 pixels. It is the first touchscreen panel on a tablet that comes well shielded by Corning Gorilla Glass 4. That extra bit of protection guards the glass display in the unfortunate incident that it is dropped on a rough surface. To add precision to your notes, there is also a stylus ‘Duet Pen ‘ that comes alongside which should work on tablet and paper as well.

The smaller sibling shares exactly the same features, except it features a sharper 7.9-inch display boasting 2048×1536 pixels. Both the devices are delightfully slim and their moderate weights at 850g and 350g should not bother users during use. The 4:3 aspect ratio is a clever addition that allows the two tablets to replicate A and A5 documents.

Both the Pro Slates pack a Qualcomm Snapdragon 800 Quad core processor under the hood. Coupled with 2GB of RAM, this chipset should tackle any task you throw its way with ease. The integrated graphics would also allow users to render videos in HD. The flash storage available on Pro Slate 8 is 16GB whereas Pro Slate 12 can accommodate up to 32GB. There is also an 8-megapixel snapper along with a 2-megapixel front-facing camera to quench your thirst for photography.

Both tablets would run the Android KitKat out of the box. There are also a number of pre-installed apps that will come as part of the package. Users can also remotely apply security settings or lock the two devices using HP Touchpoint cloud-hosted management service. Sharing screens on a monitor or a projector is also possible using Miracast.

The absence of HDMI and USB 3.0 slots means that users make do with a microUSB 2.0 port. There is a microSD card slot available to expand storage once your tablet gets bloated with content. WiFi connectivity should also not be an issue with the latest 802.11ac WiFi networking onboard.