Microsoft Devices is working on a new strategy for Pakistani market that revolves around the introduction of affordable Smartphones in line with the purchasing power of the masses in the country.

This was stated by Leila Serhan, GM for Microsoft North Africa, East Mediterranean and Pakistan, who is currently on an official visit to Pakistan to review the upcoming and current Microsoft projects in the country. She will also meet with government officials, partners and media.

Cheaper Lumia Devices Are On The Way:

“Right now, Microsoft devices are struggling in the country due to relatively high prices, but that’s going to change with the company’s shifting strategy for Pakistan. There are few devices in the pipeline, particularly in the Lumia family, that will be highly affordable and will appeal to a wider demographic.”

Commenting about piracy in the country Leila said:

“It’s a major issue in the region and in Pakistan as well and Microsoft is considering offering lower costs to consumers to counter that. On a positive note, the piracy rate of software in the country has gone down to 86% from 95%. It could be further decreased by 6-7% if government department avoid using pirated software.”

Urdu Version of Windows 10 Could Be Released:

Windows 10 is being introduced globally later this year and an Urdu version could be released despite negative feedback in previous versions of the operating systems. 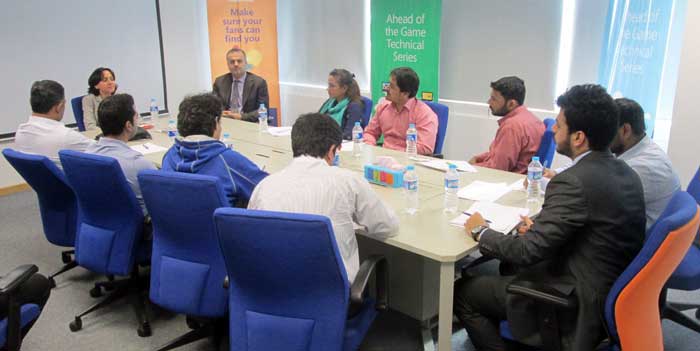 Talking about strategy, Leila said that the company is focusing on Mobile First, Cloud First with its all programs related to education, innovation and entrepreneurship. Companies in Pakistan are rapidly adopting Microsoft’s cloud services. Microsoft despite immense competition from local and foreign players in the market. .

“The development in infrastructure in Pakistan have impressed me greatly. 3G/4G technology launch has made a difference and I was able to use hotspots at many places during my visit and got high internet speed at office as well. I believe the technology shift will provide excellent opportunities to all walk of people from students to teachers, innovators to entrepreneurs,” GM Microsoft said.

Microsoft Will Continue to Invest in Pakistan:

Lelai said, “Microsoft sees great opportunity in Pakistan despite hurdles. The company is a part of PM Laptop Scheme. It is also working with different universities under Higher Education Commission (HEC) for providing access to its products for the educational purposes.”

“There have been three Microsoft Innovation Centers set up in Islamabad, Lahore and Karachi which will be further utilized for the purpose of innovation and entrepreneurship. App developers are doing amazing work in Pakistan and I have no doubt they can make the difference with their ideas and technology but they should be funded locally by someone with dedication as well”, she added.

“Though the technologists business is harder in Pakistan, we will continue to expand ourselves with every emerging venues of the business. We will continue our CSR activities, jobs, training and internship programs.”