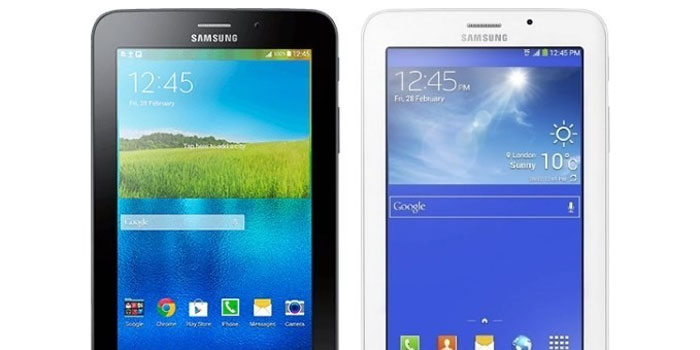 In another event in Malaysia, Samsung announced the Galaxy Tab 3 V which will join its more capable brethren, the more powerful Galaxy Tab A pair, announced in Russia earlier.

The Tab 3 V features a 7” TN LCD display with a resolution of 1024 x 600 pixels. The WSVGA resolution results in a very low 177ppi. The lack of an AMOLED or IPS panel is also disappointing but an aspect ratio close to 16:9 favours video watching on the tablet.

The innards of the Tab consist of an entry level 1.3 GHz quad-core Spreadtrum chipset and 1 GB of RAM. The built-in storage is a mere 8GB but the Tab has a microSD card slot that supports upto 32GB to make up for it. The tablet comes with 3600 mAh battery under the hood.

Surprisingly, it comes with an FM radio receiver (not so common amongst tablets) and a sim slot for cellular connectivity. Even more surprisingly Samsung has made the tablet LTE compatible which does not cost any extra premium. The tablet also comes with a duo of 2MP front and rear cameras.

The tablet comes with 4.4 Kitkat with very few chances of being updated to Lollipop. The tablet is priced at 135 US Dollars and is available in White and Black colours. The tablet is expected to be released in other Asian markets very soon.