Telenor Pakistan reported a double digit YoY increase in its quarterly revenues for Q1 2015. According to financial stats made available by Telenor group, Telenor Pakistan generate a total of Rs. 26.08 billion during the reported period, up from Rs. 23.68 billion it generated during Q2 2014.

Telenor said that revenues were offset by growth in the subscription base, increased revenues from incoming international traffic and financial services.

The EBITDA margin increased by 6 percentage points mainly due to higher revenue growth and reduction in energy costs in addition to a positive one-time effect from reversal of accruals. The underlying EBITDA margin was 41%.

Capital expenditure increased due to further expansion of the 3G network with more than 900 sites added during the quarter, thereby expanding the 3G coverage to 78 cities.

Telenor’s ARPU decreased by 6%, primarily to reach Rs. 182; mainly due to the continued on-net competition which was partly offset by increased revenues from data and voice bundles and growth in emergency loans.

Quarterly financial report said that the number of subscriptions increased by 50,000 during the quarter, negatively affected by restriction of new SIM sales during the SIM verification period.

At the end of the quarter, the subscription base was 4% higher than the same quarter last year.

Telenor said that its 27% of the subscribers are now active data users.

Check below financial highlights of Telenor Pakistan for first quarter of 2015: 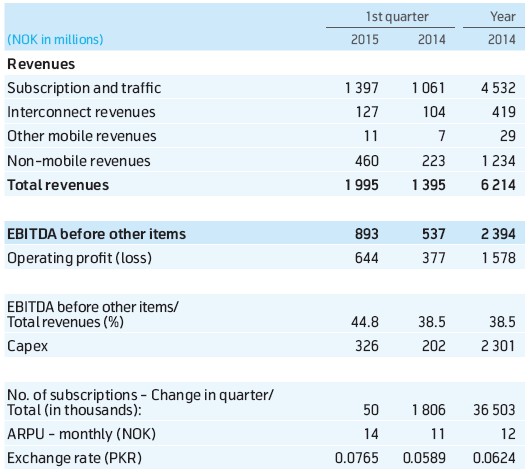