Telenor Pakistan posted Rs. 23.68 billion in revenues during Q1 2014, up from Rs. 22.40 billion it generated during the same duration last year, demonstrating a growth of 5.4 percent in total revenues.

Telenor said that this increase in revenues is mainly driven by introduction of call set-up charges and uptake in data revenues.

The EBITDA margin remained stable as the increase in acquisition costs from strong subscriber growth was offset by post-swap savings and lower energy costs resulting from several energy saving initiatives.

Company posted an operating profit of NOK 235 million ( or Rs. 4 billion) as depreciations were reduced following the completion of network modernisation, that finished during last quarter of 2013.

Similarly, capital expenditure (that stood at Rs. 3.43 billion) decreased due to completion of network modernisation and was focused towards network optimisation in addition to increased capacity and coverage.

ARPU in local currency decreased by 6%. Company said that this decline in ARPU is due to intense on-net competition and subscriber growth in lower revenue generating segments.

Check below the financial highlights of Telenor during Q1 2014: 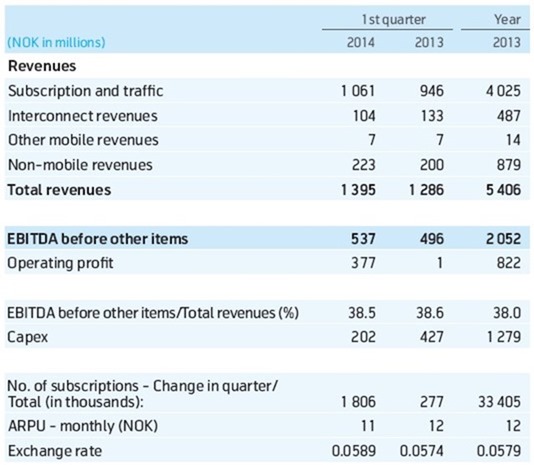