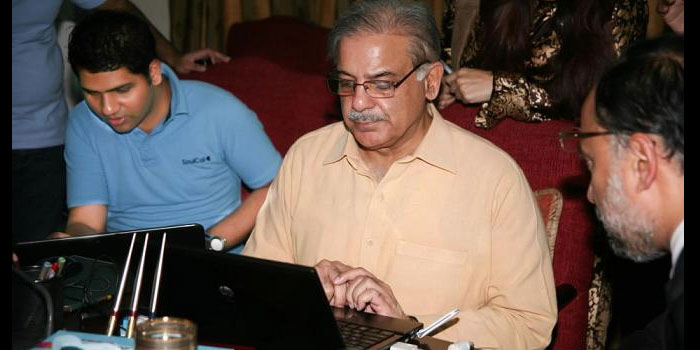 Shehbaz Sharif said that agriculture is indeed the backbone of Pakistan’s economy and that agriculture provides ration as well as exports for Pakistan. He acknowledged that farmers suffered huge losses of cotton and rice crops last year. He said that he and the Prime Minister are both aware of that and other problems related to agriculture and farmers.

He said that Punjab has provided 30,000 tractors at discounted rates to the farmers during the past few years and that most other agricultural seeds are provided for up to 50 percent off. He assured the farmers that their interest will be safeguarded and the involvement of any mafia that hurts farmers’ interest will be eliminated.

Replying to the individual’s questions regarding lazy police officers who don’t attend offices, the CM said that further investigation will be carried out on the matter and that he will personally raise the question in the next session.

He said that Punjab Information Technology Board (PITB) has been tasked with introduction of biometric attendance system in the police department. This modern system will ensure proper attendance and availability of the police officers.

He also said that stern actions will be taken against officers who do not fully perform their duties.

Q: The problem of dangerous buildings in Punjab (Mr Hamdani from DG Khan)

Answering a question regarding the safety of citizens from dangerous and old buildings, the chief minister said that he has already instructed a survey of the whole of Punjab for searching buildings which show signs of wear and instability. He said that he was aware of the problem and has issued billions of rupees of funds for the repair or destruction of such buildings which could prove dangerous in natural calamities.  He said that he is personally monitoring the progress and that work is already underway.

Responding to a question regarding land management, Shehbaz Sharif said that Land Revenue Record Management and Information system project has been completed and service is already active in 143 tehsils of Punjab. He said that data of 55 million people has already been recorded in the computerised system.

He assured that this new method will put an end to the partnerships of patwaris and tehsildar. Ownership deeds and other documents are being provided within 30 minutes at the service centres. The project cost the government Rs. 11 Billion and will help in eliminating fraud and forgery.

Q: Pollution from Industry in Sialkot (Syed Subhan from Sialkot)

Replying to the citizen from Sialkot, CM Punjab said that he was aware of the problem and that pollution due to industrial units is a problem faced by all of Pakistan. A sum of Rs. 300 million has been issued for shifting some of the industry to outside of Sialkot city.

Shehbaz Sharif replied by saying that floods and rains are due to climate change and has greatly affected Pakistan. These floods are affecting Pakistan on a regular basis. He acknowledged that Pakistan failed to build water reservoirs for the past few decades.

He said that Punjab has developed a lot small dams in Punjab but large dams are the only way to solve the problem. He said that dams like Dasu Dam and Bhasha Dam could have helped avoid a lot of trouble had they been build earlier. He said that Dasu Dam is near completion and will add 4,000 MW to the electrical system of Pakistan. The first phase of the dam’s completion will be completed with 4 to 5 years. Barrage repair and other small dams are under construction and will be completed in the coming years.

In a separate statement Shehbaz Sharif stated that feedback from the people was important in understanding problems and bridging the gap between the people and the government. He mentioned that the use of new technology can help in bridging this gap.