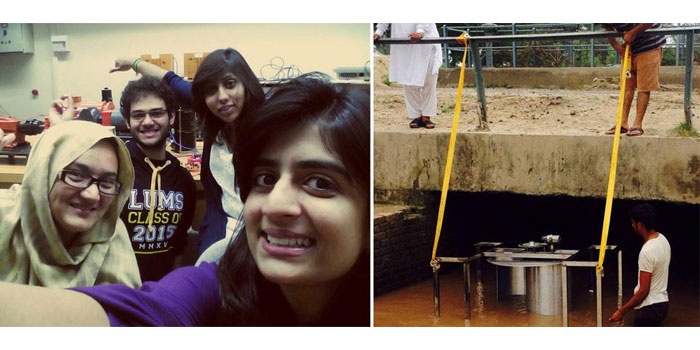 This year’s competition focuses on Climate Change and Water Availability for Food Production. It aims to showcase innovative solutions for the development of efficient water management and water-smart food production, and to help the winner in expanding their existing project or bringing their fresh ideas to fruition.

Pakistan has a widespread irrigation network, with canals that span across 75% of its farmlands. Due to the lack of a proper monitoring and control system, farmers are forced to work with severe water scarcity issues. Moreover, the irrigation network is controlled manually, making it extremely inefficient as a result. Based on a rough estimate, the system fails to provide water to 55% of the aforementioned farmlands.

HINA overcomes this issue by providing a smart and sustainable solution that controls the irrigation network through the utilization of its own inherent potential. The hydrokinetics system harnesses energy from the slow moving water bodies, such as canals and rivers, and uses it to power the motors for the automation of canal gates.

It is a cost effective base unit which is replicable, scalable and requires minimal infrastructure and resources for deployment. LUMS has successfully implemented and demonstrated a working system that is currently being field tested at a BRB link canal.

HINA is acknowledged by the ICCG Best Climate Practices contest as one of the world’s top 45 projects in the field of climate change, renewable energy solutions and water management.

HINA system, developed at LUMS, is recognized as one of the world’s top 45 projects in the field of climate change, renewable energy solutions and water management

The winning team of 2015’s Best Climate Practices contest will be determined on the basis of a score equally weighted between the outcome of a public online poll and an assessment by the international Expert Panel.

In addition to awarding a prize money of 10, 000 Euros, ICCG will promote the winner along with other deserving projects through its communication channels. The winner will be announced in early October and the prize awarded during a ceremony organized in the framework of Expo Milano 2015 Universal Exhibition.