As internet usage grows rapidly in Pakistan, telecommunication companies, chiefly Mobilink, Telenor, Zong, Warid and PTCL, have all joined the race in providing not only the best, but also the most affordable and the most efficient 3G mobile broadband devices and packages in the country.

We are often asked by our readers about the best option to go for in terms of 3G mobile broadband and here we are with the answers.

Please note that this post is about hardware based (Wingle,WiFi and MiFi) 3G devices and packages only.

Things to Consider before Buying a 3G Mobile Broadband Device:

If you are planning to buy a 3G mobile broadband Dongle, 3G MiFi or any other 3G device, below are things that you should consider before making a purchase:

Device cost, that’s one off payment you have to make to acquire the hardware (Dongle, MiFi, WiFi etc). One can compromise a little on the device cost, i.e. pay more just once if other parameters are in your favor.

There are three types of mobile broadband devices available in the market. Depending on what you need and how you need internet is important before selecting your device type. Keep reading to know more:

Monthly recurring charges are to be considered very carefully. This is a service charge or line rent of 3G devices you have to pay on monthly basis and you must look at your affordability before making a decision.

3G Wireless internet is never unlimited and hence there are data limits for every wireless internet solution. Now depending on how much data are you going to consume is going to be vital decision you have to make before purchasing a 3G data plan.

However, it may depend on what amount of data limits you may require for your usual internet needs, including emails, size of attachments, browsing time and type and so on to decide a 3G data limit.

Coverage and QoS in Your Area

Lastly and most importantly you must test the quality of service and 3G coverage of a device and the operator (by lending from a FnF maybe) in areas where you plan to use the 3G broadband internet.

You must know that certain operators perform better in one area than others. This can be due to low number of customers from your respective operator in the area or maybe because the cell site (BTS) of this operator is nearer to you as compared to other operators and hence may offer you better 3G speeds and the quality.

So its always safe and better to check the 3G services of an operator before you make a purchase.

We have prepared an infographic to give you an overview of 3G / 4G offerings from various operators. This graphic will tell you the device cost, 3G and 4G data plans and their pricing details.

Have a look below before we go into operator-wise details for mobile broadband internet solutions: 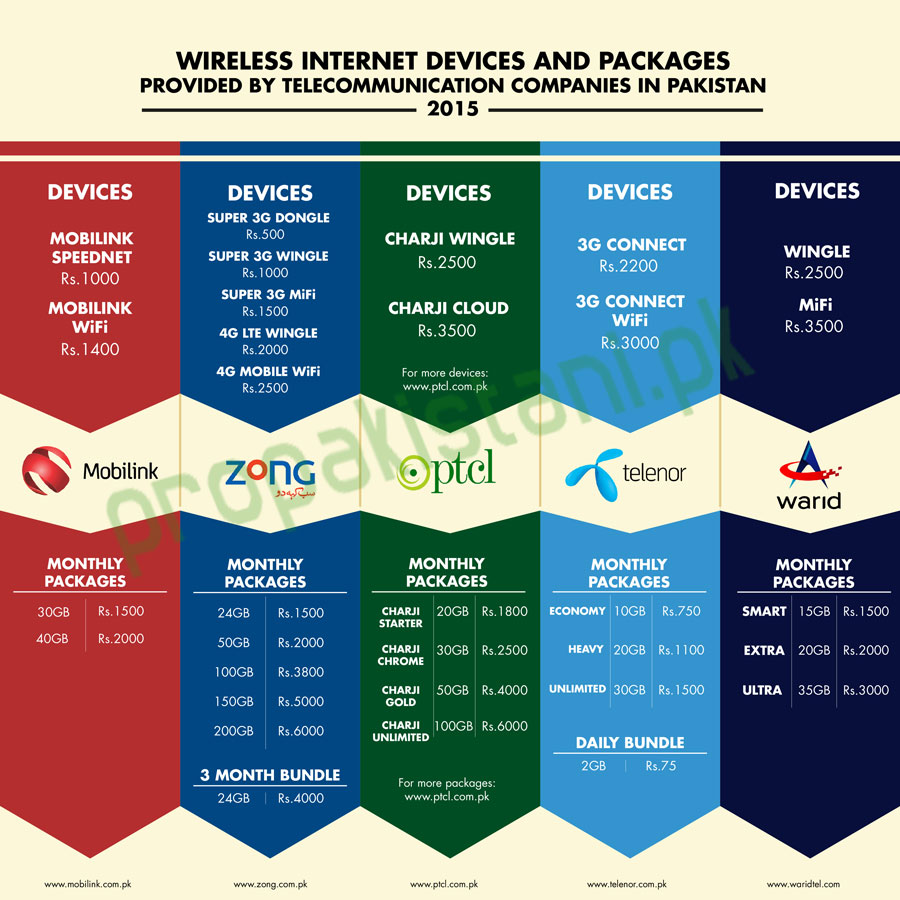 Mobilink, one of the earliest GSM companies of Pakistan, also provides its subscribers with high speed 3G internet and wireless 3G internet dongles.

These dongles come with packages of 15 to 25 GB of data capacity and run with prepaid services, which enable Mobilink customers to pay as they go.

The internet services provided through these devices are offered in multiple packages, such as Smart, Extra and Ultra, with their respective rates. 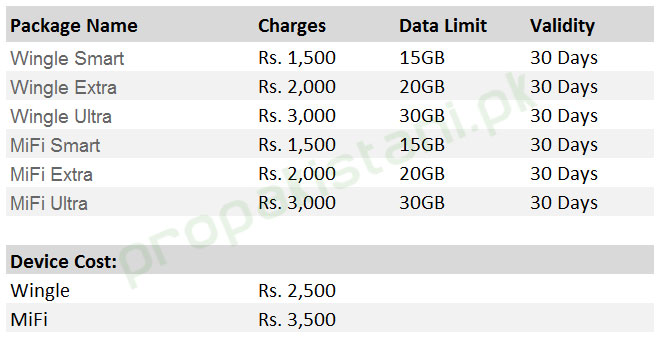 Another leading telco, Zong is a subsidiary of China Mobile, the largest telecommunication company of China. It provides both 3G and 4G wireless internet devices and services such as Wingles and MiFi devices.

Zong is one of the fastest growing 3G service providers in the country and is also the only telecom company to provide uninterrupted internet over motorways. 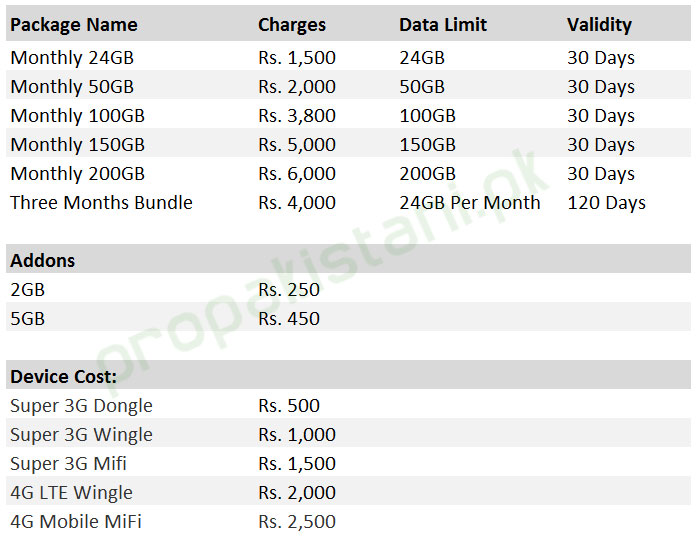 The wireless internet services offered by PTCL include various devices such as the EVO, Nitro and Chaarji, which include multiple kinds of USB dongles, wingles and Cloud devices, each with their respective price and package range.

These devices can all be used simultaneously by multiple users and on multiple devices such as smartphones, laptops, tablets, Smart TV etc. in order to enjoy internet services. 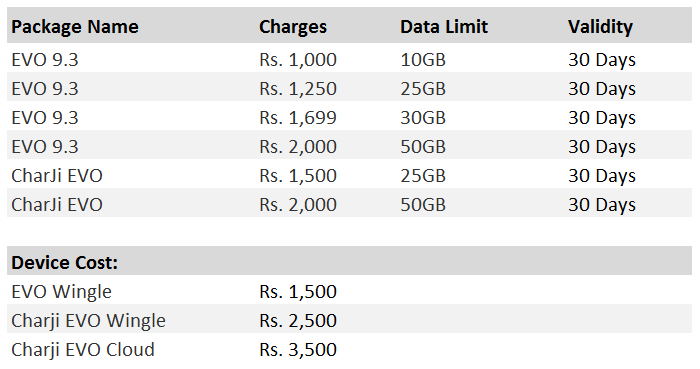