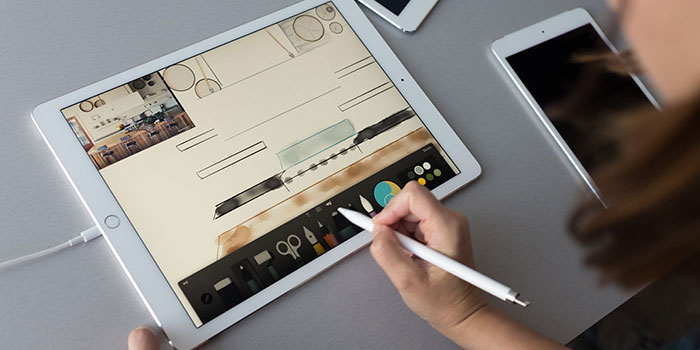 Despite the fact that Apple’s 12.9 inch iPad Pro packs one of the most powerful mobile chipsets and as much RAM as a 64-bit operating system running laptop, the tablet has a lot of catching up to do in terms of matching the sales of iPad Air 2. Here are some reasons why Apple’s iPad Pro adoption rate is very poor.

According to Localytics, the Apple iPad Pro only has a market share of 0.3 percent while iPad Air 2 has a market share of 11 percent. Why is this so? It is fairly simple to say that iPad Pro is an amalgamation between providing the customer the functionality of a notebook and the portability of a tablet. However, due to the fact that it is limited to running iOS applications, regular users will not be able to take advantage of the desktop experience that they so readily do with Apple’s Mac OS X. Another reason why iPad Pro is not popular amongst developers is because Apple’s App Store prohibits releasing desktop type applications, which would definitely do well on a large and powerful tablet such as this.

You Have To Pay For Additional Accessories

With a notebook, you get the obvious things with it ranging from a keyboard and a slew of connectivity ports. With the iPad Pro, it is just one tablet, and you have to pay for its accessories, including $99 for an Apple Pencil. This does not translate into a great deal for consumers since the total cost will add up to the price of a high-end notebook, which is definitely what consumers will opt to go for instead.

Another reason why iPad Pro has a slow adoption rate amongst consumers is because of its price/performance mismatch. The base model of the tablet costs $799 (this includes just 32GB of storage) and after adding the remaining accessories ($169 for the keyboard accessory and $99 for Apple Pencil), you are getting an overpriced laptop substitute that clearly does not feature enough storage to provide a suitable alternate experience. Granted that its battery life and chipset make it enviable, but if one of the most crucial features is not present in abundance, then it obviously becomes a huge deal breaker for thousands of consumers, who would just as easily look for a much better product.

What Should Apple’s Next Strategy Be?

It is quite obvious that Apple does not intend on bundling the accessories free with its tablet, but they can at least revise their policies in making sure that developers get freedom in producing mobile applications that are dedicated towards the iPad Pro. This way, a small, yet catered market will definitely be attracted towards the product.