Mobile phone companies witnessed a solid growth of 69 percent year-on-year (YoY) for data revenues during Jul-Dec 2015 as telcos have been increasing their stakes in Pakistan’s telecom market by envisaging a deeper internet penetration targets, after the roll-out of 3G-4G services in the country. This observation was made by the Annual Report of State Bank of Pakistan (SBP) which highlights the ‘State of the Economy’.

Without sharing any figures, the annual report said that increase in data revenues is likely to continue in the remaining period of FY15, as approximately one million 3G/4G/LTE subscriptions are being added every month since the commercial launch of these services in the country.

Experts say that this growth in data revenues was bound to occur, however, there’s a compromise that telcos are making against this increase in revenues from mobile internet services as overall revenues have declined notably during the recent past. 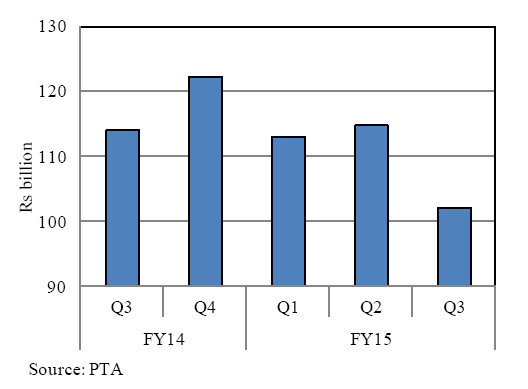 Experts say that this decline in revenues is mainly due to fierce competition among the operators and is partially offset by increased usage of OTT services (Whatsapp, Skype) in place of usual voice and telephony services.

Experts also say that the increase in 3G/4G usage will continue to rise during next several months, despite the fact that the network up-gradation process has slowed down lately.

According to the annual report “State of the Economy” published by State Bank of Pakistan, the Telecom sector dominated the outflows, as newer investments are on decline.

As it appears, telecom companies are not reinvesting much, and are repatriating most of their earnings.

It is important to recall here that telecom has the second-largest share in outstanding foreign direct investment (FDI) in Pakistan, after the financial sector. However, its contribution in profit repatriations has generally remained much less than other sectors, as stiff competition never allowed firms to substantially raise their profit margins. However, due to price slump, repatriations from this sector in FY15 remained more or less unchanged than last year.

According to the Bank report in the case of telecom sector, the decline in FDI was expected, as telecom operators had borrowed huge sums from their parent companies last year to pay for the 3G/4G spectrum licenses.

The SBP further states that within the telecom sector, the financial performance of Pakistan telecommunication (PTCL) was not up to the mark due to the lower sales and increased cost. The drop in sales revenues is attributed to decline in revenue from Ufone, and lower tariff from international incoming minutes due to abolishment of ICH arrangement.

The market share also declined for Mobilink and Warid. On the other hand, Telenor and Zong improved their performance and repatriated significantly higher profits in FY15 as compared to last year.