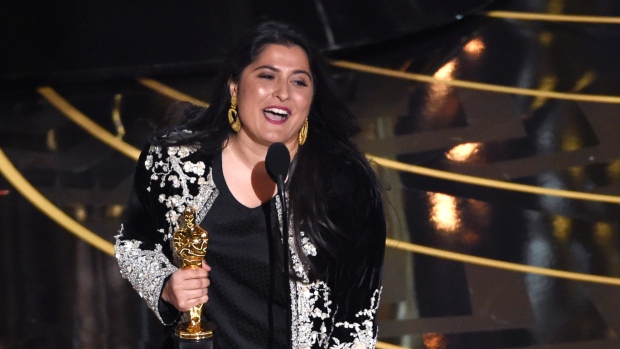 She won the Oscar for her documentary, ‘A Girl in the River: The Price of Forgiveness’ in the Best Short Documentary category. This documentary examines the issue of honor killings, or ‘karo-kari’ as it is known in the local lexicon.

It’s the story of an 18-year-old Pakistani girl who survived a brutal attack by the male members of her family and hopes to wake up the Pakistani lawmakers into drafting a law that protects the female population from a tribal and barbaric custom.

Mrs. Sharmeen hopes that her socially charged investigative film opens the eyes of many of her fellow countrymen who look at honor killing not as a crime, but as a means to evade justice.

Previously, she screened the documentary to Prime Minister Nawaz Sharif and other lawmakers, hoping to build support for the honor killing legislation in the parliament that outlaws the practice and features stiffer penalties for offenders.

On Her Oscar Win:

“This is what happens when determined women get together. From Saba, the girl in my film who remarkably survived honor killing and shared her story, to Sheila Nevins, Lisa Heller from HBO and Tina Brown who supported me from day one. To the men who champion women, like Geof Bartz who has edited the film to Asad Faruqi, to my friend Ziad who brought this film to the government, to all the brave men out there like my father and husband who push women to go to school and work and who want a more just society for women! Last week, our Pakistani Prime Minister [Mian Muhammad Nawaz Sharif] has said that he will change the law of honor killing after watching this film. That is the power of film!” – Sharmeen Obaid Chinoy

It is good to hear of Pakistanis making a mark globally. After having scored an Oscar first in 2012 when she wasn’t a household name and had limited resources, this second win basically solidifies her status as a visionary for women rights.

Her unwavering drive and spirit makes her a great role model for Pakistani girls, and it is hoped that her efforts unite stakeholders in Pakistan be it civil society, government, judiciary and most importantly, the common folk, against the bane of obstructionist and myopic elements that have held us back for far too long.