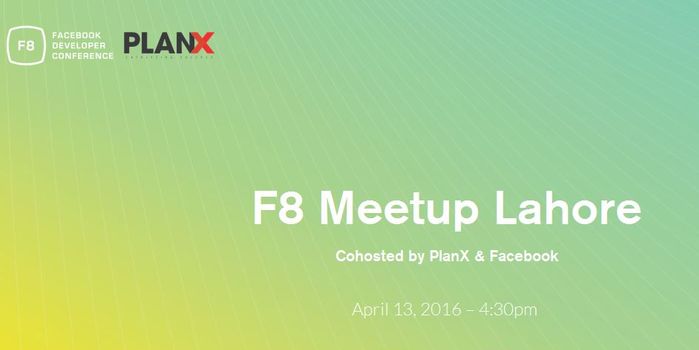 One of the world’s biggest developer conferences is coming to Pakistan. PlanX has officially partnered with Facebook to launch an F8 Meetup at Lahore. PlanX and Facebook will be co-hosting the event. This is the first time that Facebook’s popular Developer Conference will have any official representation in Pakistan.

PlanX is a project from the Punjab Information Technology Board (PITB) which has made a name for itself amongst the startup and entrepreneurship market. Its job is to assist tech startups and help them accelerate to success. The technology accelerator utilises a vast network of founders, mentors and investors for its acceleration programme. It’s a platform for startups to meet deep-pocketed investors. PITB’s PlanX has successfully assisted a number of popular tech startups over the past few years.

Facebook F8 is an annual event intended for developers and entrepreneurs who build or plan to build their products and services around the social network’s product portfolio. The name F8 derives from the Facebook tradition of having 8-hour hackathons. Each year, the conference begins with Facebook founder, Mark Zuckerberg, taking the stage followed by a number of key figures with their breakout sessions. Facebook often introduces new features, products or makes announcements during the conference.

This year’s Facebook F8 will be held at Fort Mason, San Francisco, California and will be held on April 12 and April 13 2016. Facebook will announce some new products, tools and reveal some interactive demos. Speakers will help developers in growing and monetizing their apps the right way. More than 40 sessions will be conducted by Facebook’s leading figures. There will be dedicated sessions on Media & Publishers, Engineering and Open Source, Design, Messenger, Growth & Monetization plus a lot of other topics.

The F8 Meetups are held across the world for those who cannot attend the event in San Francisco. F8 Meetups start off with a stream of the opening keynote followed by discussions amongst the local developer community alongside some food and drinks.

How to Register: Head to the official F8 Meetup homepage here.

Those who cannot attend the event the F8 Meetup or conference can watch the whole thing online by getting registered here.