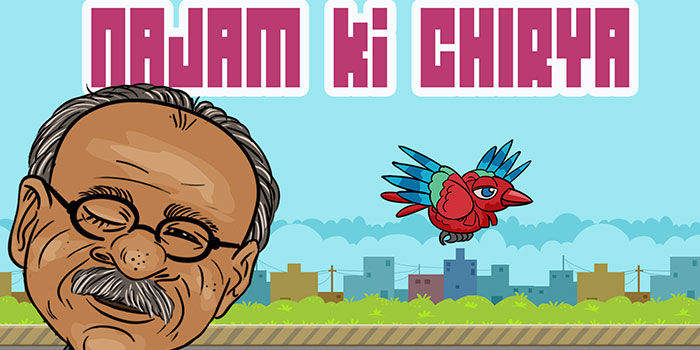 Najam Sethi needs no introduction. Political analyst, PSL head honcho, talk show anchor, his career has been varied and interesting. And many of the people who tune into his popular current affairs show ‘Aapas Ki Baat’ are familiar with the ever-mythical Chirya that Mr. Sethi refers to from time to time.

For fans and detractors alike, a new mobile game ‘Najam Ki Chirya’ is going to keep them all occupied for hours. The free game from Offroad Studios, a Lahore-based interactive media agency, draws from the entire political tapestry of Pakistan. Players control a ‘Chirya’ and to fans of the masochistic time-waster Flappy Bird, the gameplay will feel intimately familiar. You control the Chirya, helping it navigate obstacles as you keep it alive for as long as you can.

What makes this so different from being a Desi Version Of Flappy Bird?

After the success of similar political-tinged games such as Gullu (Butt) and Go Nawaz Go, it seems that the Pakistani audience loves their games with a dose of political humor thrown in. ‘Najam Ki Chirya’ pokes fun at Pakistani politicians and other media personalities, displaying their pictures the further you get with your Chirya in the game.

As you can see with the use of terms such as ‘parchi’ and ‘punctures,’ the game makers certainly infused it with a Pakistani sense of humor. The game is packed with a ton of desi in-jokes that feel familiar to every Pakistani such as ‘Bright Karein Issay’ and ‘Zubeda Apa.’ Plus it has voice-overs that playfully mock the players at times, adding to the game’s localized flavor and replay value.

A light-hearted mobile game like Najam Ki Chirya seems like a winner. Unless of course you really hate the hard-as-nails difficulty on it. But isn’t that part of its charm? Try it for yourself today.

Where to Find the Game?

Najam ki Chirya is available for both Android and iOS. And did we mention that it’s free?