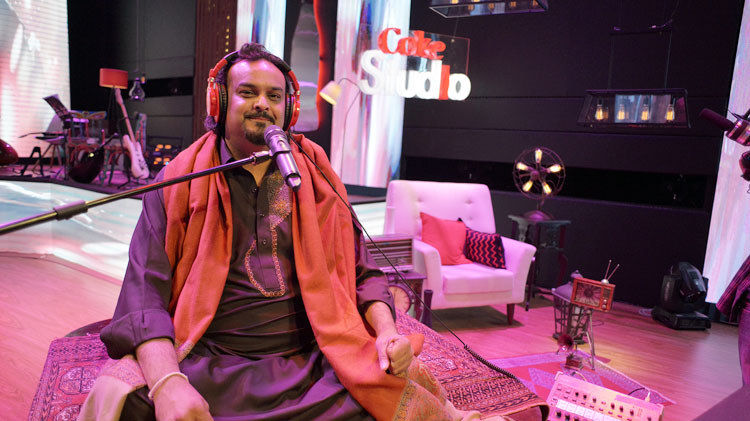 Season 9 of Coke Studio will be remembered by fans for all time to come, as Amjad Sabri, who passed away tragically just a few days ago, will be seen performing in this Season.

In what is probably the last studio recording, Amjad Sabri together with Rahat Fateh Ali Khan read the qawwali, Aj Rang Hai.

With the duo of Bilal Maqsood & Faisal Kapadia of Strings as Executive Producers, the Season will bring together multiple music directors, delivering music of different genres will bring forth the talent of some of the most accomplished and major names of the industry including Noori, Shani Arshad, Jaffer Zaidi, Shiraz Uppal, Faakhir Mehmood and Shuja Haider.

Although Amjad Sabri did not feature in previous seasons of Coke Studio, Tajdar e Haram was performed in Season 8 last year by Atif Aslam, as a tribute to the original performers, Ghulam Farid Sabri and Maqbool Ahmed Sabri.

Amjad Sabri had also helped Coke Studio on this rendition. The rendition gained worldwide fame with over 33 million views on digital media.

Speaking about his kalaam during the recording in May, the late Amjad Sabri had stated, “About 40 years ago, my father and Nusrat Fateh Ali Khan read this kalaam at a dargah in Karachi and 40 years later, Rahat and I are reading it again (on Coke Studio Season 9).”

“Coke Studio is the ultimate manifestation of Coca-Cola’s music strategy and Season 9 will further strengthen Coca-Cola’s cultural leadership, celebrating diversity while bridging barriers relevant to the youth of today,” stated Rizwan U. Khan, General Manager of Coca-Cola Pakistan, and added, “It is very distressing that Amjad Sabri himself will not be with all of us to see Season 9 go on air in August. His death is a huge national loss.”

The vast talent on the music direction and production side will be matched in Season 9 by a dazzling array of artists, many of whom have performed in previous Coke Studio seasons, as well as several upcoming and talented singers performing for the first time in Coke Studio.

The unrivaled success of Coke Studio over the years in connecting deeply and emotionally with the people and especially the youth, is evident from its immense digital footprint with 6.3 million fans on Facebook, more than 170 million YouTube views and 7.5 million plus audio streams.

It is viewed by fans in some 150 countries and has been exported to 20 countries.

In Pakistan it has proved to be a unique platform for high profile projection of everyone associated with the music industry, including singers, back up vocalists, composers, producers, musicians and technical persons of every possible specialty, without whose invaluable contribution no Season could have been produced.