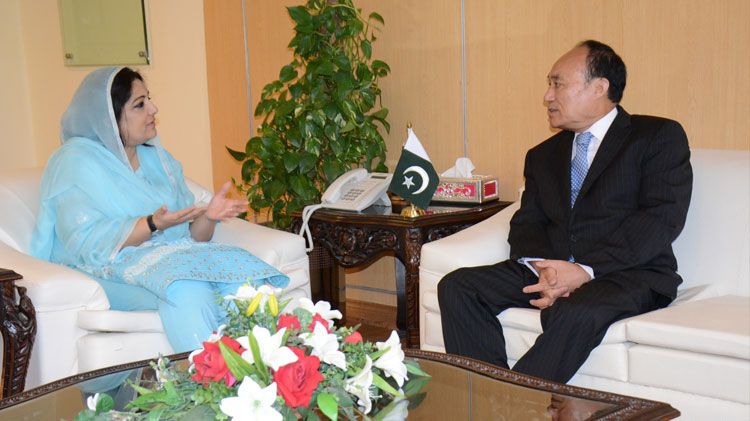 Pakistan raised the issue of GSM signal spillover of Afghan operators with Secretary General International Telecommunication Union (ITU), as it is an increasing and continued security threats and matter of concern for the country.

Islamabad and Kabul are yet to devise a mechanism to block out signals of Afghan telecom operators from spilling over into the border regions to curb terror attack.

Pakistan has asked Afghan authorities repeatedly and raised the issue with Kabul after the Army Public school Peshawar massacre and attack on Bacha Khan Charsadda University, however, no definite solution has been put forward by Afghan authorities as of yet.

Matter was discussed in detail when Secretary General ITU Mr. Houlin Zhao (who happens to be in Pakistan in connection with the Asia pacific roundtable conference being hosted by Pakistan) visited Ministry of IT and Telecom today and met Mrs. Anusha Rahman in her office today.

Not to be mentioned, Afghan Telecom Regulatory Authority is also in Islamabad for the Asia Pacific Regulators’ round-table.

Pakistan is hoping ITU to play a role during the mediation with Afghan Authorities while they are in Islamabad.

Anusha Rehman, During his visit to MoIT, briefed the Secretary General regarding the recent development and key initiatives being taken by Pakistan in the field of ICT’s

Anusha Rahman said that GOP is fully cognizant of the fact that development of ICT’s is a key to spur socio-economic growth. “Therefore we are rigorously pursuing the agenda of Digital Pakistan on priority basis. Our vision of accelerated digitalization will surely transform Pakistan in to a knowledge based economy, said Anusha.

She stated that her Government staunchly believes in ubiquitous development of ICT’s infrastructure across the country with special emphasis on serving marginalized segment of the society.

“Therefore we have already rolled out programmes of worth Billions of Rupees through USF in order to connect un-served / under-served areas of Pakistan under “Rural telephony project” and we are also ensuring the provisioning of 2G/3G services to all these remote and far flung areas and by end of 2018 such parts of Pakistan will be connected Insh Allah”, further told the Minister.

Anusha Rahman said that our broadband penetration has phenomenally rose to more than 19% from less than 3% within the shortest span of two years and we are anticipating 38% increase by the end of 2020. She said that our Government has successfully curtailed the menace of “Gray Trafficking” Through an appropriate policy intervention and succeeded to bring white minutes back to more than 1.5 Billion per Month.

Minister of IT & Telecom said that we have given a comprehensive telecom policy document which not only covers regulatory framework but also addresses all the challenges being faced by the telecom sector in modern era including availability of spectrum, infrastructure deployment , content and application development, spectrum trading and spectrum sharing etc.

Anusha Rahman apprised the Secretary General ITU that provision of ICT services to the marginalized segment of the society and women empowerment are the main focused areas which are being dealt on priority basis by the current government of PMLN . We have started a special program for the girls of lower income strata/poor segment of the society through ICT for Girls Project and Latest Skills of Coding and Computing are being taught to them. so that they could earn their livelihood honorably, while sitting at their homes. 150 Women empowerment Centres of Baitulmaal are being equipped for this purpose.

She further said that in order to promote and train the young entrepreneurs, the first National Incubations Centre has been established which will start functioning soon. First state of the art technology park is being established in Islamabad and two more such parks will also be established soon at Lahore and Karachi respectively.

Anusha Rahman said that “Cyber Security” has become a “Global Concern” now. We believe that “offline rights should also be available online” and ITU being a leading global platform must play its role to address this growing global concern. She also suggested that ITU may constitute an “Advisory Committee” comprising of all stakeholders to study this new emerging phenomenon and could take policy measures on recommendations of Advisory Committee.

Secretary General ITU appreciated the visionary leadership of Minister for IT&Telecom Anusha Rahman and also congratulated her for hosting a global event of Asian pacific round table conference first time being held in Pakistan. In his maiden visit to Pakistan Secretary General discussed areas of further expansions in ICT including mechanism for handling cyber crimes and cyber security.

This meeting was followed by a discussion/briefing session with Moit team. Federal Secretary IT, Members (IT,Telecom,Legal & HR), CEO’s USF, ICT R&D Funds Co., DG SCO, and all senior officials of the Ministry and its attached departments participated in the briefing and finally Minister thanked the Secretary General ITU for his esteemed visit to Ministry of IT&Telecom.