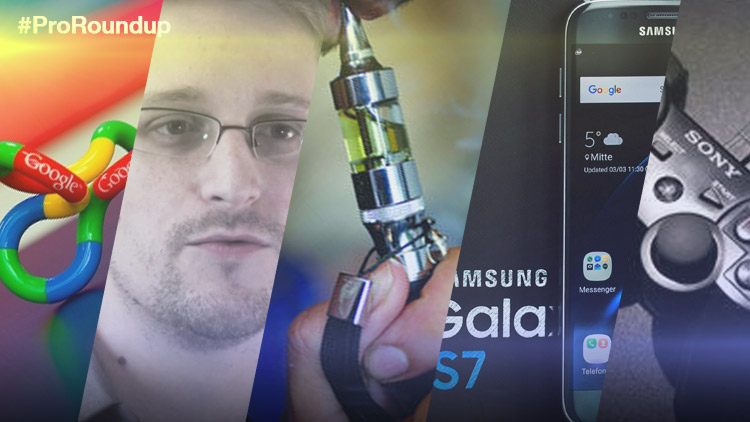 Google is turbocharging the utility of Sheets and Docs on Android with the addition of add-ons. These add-ons can help you with digital signatures, integrate CRM data, make apps from Sheet data without the need for code, scan documents and add them in Docs as editable text and more. Just use the Add-On menu in the apps to install them.

Edward Snowden recently tweeted that while Wikileaks was a credit in this age, its famous hostility towards curation was a mistake. In response, the Wikileaks Twitter account responded with: ‘Opportunism won’t earn you a pardon from Clinton & curation is not censorship of ruling party cash flows’. Cue the popcorn!

A staggering 78% of the $546 million in profits at Sony in Q1 2016 were contributed by the Playstation division. The company was quick to point out that the increase came due to games rather than hardware. Overall though, things are grim with both revenues down 10.8% and profits down by 42%.

Samsung has posted a revenue of $45.2 billion and operating profit of $7.22 billion. Both revenue and profits were up by 5% and 18% respectively y-o-y. The Mobile division was responsible for half of the revenues and profits. Strong sales of S7 & S7 Edge helped the company and it’s counting on the new Note to continue the good streak into the next quarter.

A healthy quarter has pushed Alphabet’s value over $500 billion. Revenues rose by 21% to $21.5 billion. Profits were up by 24%. Google’s Ad business had a strong showing but there is concern over Facebook, which is rapidly gaining market share. Interestingly, Alphabet now owns 7 services that have over 1 billion users each.

Researchers at Yahoo Labs have created an online abuse filter that has an accuracy of over 90%. Machine learning and AI help identify offensive and hateful speech and comments. Even if individual words aren’t offensive but the whole sentence is, the filter will catch it. About time!

Bad news for everyone who switched to e-Cigarettes since it was billed as a safer option. Scientists have discovered 2 cancer causing chemicals in liquid used for vaping. However, a lot depends on the quality of the vaporizer. Temperature, voltage and maintenance affect the amount of toxic chemicals emitted. So don’t buy a cheap vaporizer and as always, moderation is key folks.