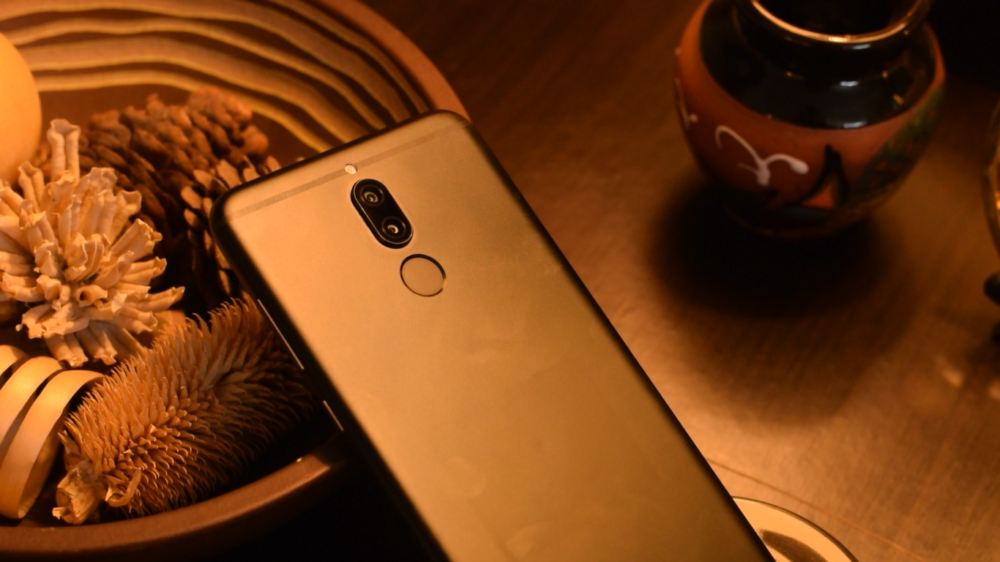 Huawei is a well-known brand in Pakistan and one of the second most popular brand in terms of shipments worldwide. Just recently the company launched the Huawei Mate 10 series.

We got to try out one of the Mate 10s – the Lite version of the bunch – which caters to the requirements of everyday users.

There was a lot of excitement surrounding the Mate 10 Lite, since its one of the first phones to bring the 18:9 aspect ratio to midrange.

Huawei Mate 10 Lite is also the first smartphone to feature four cameras. With a price tag of Rs. 29,999, does it offer enough to justify paying that amount? Keep reading to find out!

Huawei Mate 10 Lite features a slim metal unibody design. On the front you have the huge screen. The top sports the dual front facing cameras, the sensors and an LED flash.

On the right side, you get your power button and the volume rocker whereas on the left side of the phone you have the SIM slot.

On the top you can find the secondary noise cancelling microphone and on the bottom you have your 3.5mm headphone jack, microUSB port and the loudspeaker. 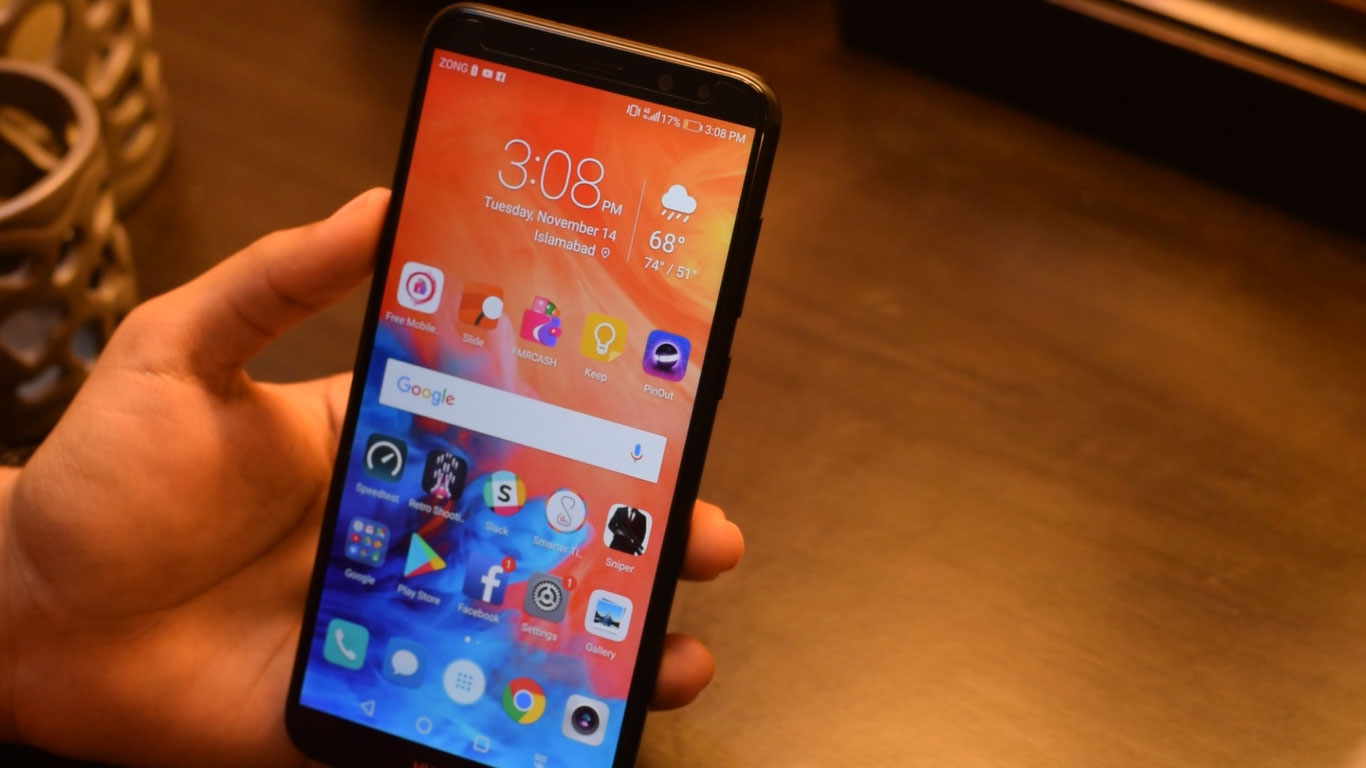 Moving on to the back of the phone, you will find the dual-primary camera a LED flash, fingerprint scanner and the Huawei branding.

Being such a slim phone, there’s a slight camera bump which means that when you put the phone down, the camera lens might get scratched if you’re not too careful.

Moving on to the display of the phone you start seeing the interesting features. You get a large 5.9-inch panel with a resolution of 1080×2160 pixels and a pixel density of 409.

The display itself is pretty sharp and nice to look at. The colors seemed a bit too warm to me but thankfully you can adjust them to your liking from the settings menu.

The screen is bright and easily visible outdoors. It gets bright enough to use it under direct sunlight and low enough that you are easily able to use it in complete darkness.

Being a 5.9-inch screen, the resolution is stretched tall and not wide. This means that it uses a 18:9 aspect ratio instead of the standard 16:9 that we are used to.

Since most videos are recorded in a 16:9 aspect ratio, there are black bars on the sides for most videos. Unlike with most other phones, you don’t get an option to resize the content, making you stuck with the black bars on the sides. Until content adopts, you can only view content on about 5,5-inches of the screen. You do, however, have an option to fit apps to the full screen but be prepared to lose content there too. Web browsing works great though and multi-tasking is easier with the longer screen ratio.

As far as the performance of the phone is concerned, let’s get the numbers out of the way first. The Mate 10 Lite uses Huawei’s own home-baked HiSilicon Kitin 659 octa-core chipset along with 4GB of RAM.

Navigating the UI was smooth and I didn’t notice any unnecessary stuttering or lag. Opening up applications was also done in a decent time and you weren’t left waiting for an app to open, which is the case with most mid-range smartphones that skimp on performance. Huawei’s skin has improved a lot over the past few years and plays a key role in the Mate 10 Lite’s performance.

The 4 GB RAM proved helpful in moving between apps and the overall performance of the phone. You can easily multitask without having each app refresh itself every time you open it. You do sometimes have to deal with the refreshing part only if you have around 8-10 apps open and you are trying to use a resource-hungry application. Even though you would expect 4GBs to be more useful, practically no one use that many apps simultaneously. So the phone is good as far as performance is concerned.

Now we’ll be heading towards the part of the phone that seems to be the highlight of the device – the cameras. Huawei has put a lot of thought into their new cameras and this time around it comes with 4 cameras.

The back camera of the phone features dual sensors, one of them having a 16MP sensor while the other one is 2MP and is used for depth-of-field. You also get phase detection autofocus and a single-LED flash. Huawei had to cut costs here and you can notice that with the lack of a dual-tone LED flash.

The pictures that it takes are really good in a lot of things. There’s lot of detail, good contrast and not overly saturated. Some images do look a bit over-sharpened but it’s more of a software enhancement issue and can easily be fixed in post processing.

The portrait mode on the Mate 10 Lite is also pretty great to work with. The bokeh is overall pretty even across all parts of the picture where it is applied and the actual bokeh itself looks pretty natural. You can even adjust it once the shot is taken in post-processing. However, not all portraits are perfect and sometimes you can easily see the points separating the subject and the background. Such an effect makes the subject look like a cardboard cutout.

On the flip side, the front camera’s portrait mode worked pretty well. It features a 13MP sensor along with a 2MP one which is also used for calculating the depth-of-field. The pictures taken without portrait mode are very detailed and it is a pretty wide-angle lens so you can fit more friends in the frame (if you have some) without any issue.

Turn on the portrait mode and things get interesting. There’s a nice bokeh in the background and it is implemented very smoothly and the effect is even better compared to ones taken with the primary camera.

You can check out the camera samples down below:

I originally had my doubts about the 3,340 mAh battery of the Mate 10 Lite with that huge screen but I was wrong. The battery performed really well, lasting a full day’s usage on mobile data while taking pictures, playing games, talking on calls, checking social media etc.

Even if the battery does fall below a critical percentage, you can turn on the ultra power saving to squeeze a few extra hours out of the battery.

To be honest, I had my doubts about the phone itself. Given its international price, I wasn’t sold on the Mate 10 Lite and thought that there was no way this could grab the market. However, once Huawei Pakistan priced it at Rs. 29,999, I knew I had to take a second look and I’m glad I did.

However, competition is getting tougher. Off late, a few smartphone manufacturers have entered Pakistani market ad each of them have a strong competitor priced around the same range. Huawei really takes the edge as far as the screen-to-body ratio and all-round performance is concerned.

In short, if you’re out in the market, looking for a phone that costs around 30k, you definitely need to consider the Huawei Mate 10 Lite.