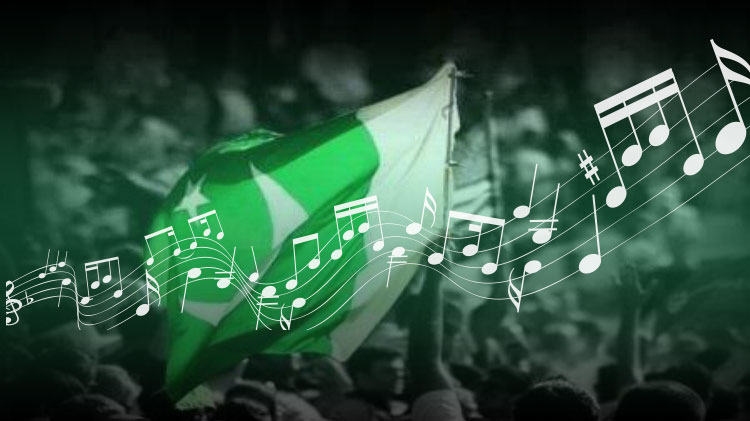 Music and in particular patriotic songs, have the ability to sum up a nation’s mood, its feeling and its sentiments in catchy melodies. Historic patriotic songs like those during the 60s boosted the army’s morale in the war with India and rallied the nation. Years later, songs became the driving force behind Pakistan’s sports campaigns in Hockey, Cricket and Squash championships.

Today, we bring to you the top patriotic songs which truly capture the spirit of independence. While the list is extensive, we had to leave out many famous ones, since space is limited but songs aplenty.

Written by our national poet, Allama Iqbal, “Lab Pai Aaati Hai” is a poem that’s been sung by children for decades in their morning assemblies. Sung after the national anthem, it has been often called the alternate national anthem of Pakistan. Kids, throughout the country, have learnt this poem by heart bringing patriotism to them from a young age.

Released by Vital Signs in 1987 and a part of their first album in 1989, Dil Dil Pakistan is often hailed as an the unofficial national song of Pakistan. It’s known to nearly every child and adult in the country and brings out one’s love for Pakistan. This song was listed as the third most popular in the world by BBC and was copied by an Indian movie song titled “Dil Dil Hindustan”.

Released in 1996, Janoon band’s song “Jazba-e-Janoon”, from the album Inquilaab, became a huge hit. Despite being the band’s first hit song, it managed to secure the position of signature song in the 1996 Cricket World Cup. It is called the greatest rock hit in Pakistan music’s history.

One of the oldest and famous patriotic anthems in Pakistan, Jeevay Jeevay Pakistan was released in 1965 at the time of Pakistan-India war. The song was written by Nawabzada Mirza Jamiluddin Ahmed Khan.

Sung by the legendary Mehdi Hasaan, “Yai Watan Tumhara Hai” has received a lot of love from Paksitanis ever since its launch in 1962. Truly one the most legendary songs sung by him.

Sohni Dharti was released after the Pak-Indo war in 1965. It is more of a prayer that may Allah keep Pakistan united and safe. It was sung by Shehnaz Begum, a Bangladeshi singer before the split up and then by Mehdi Hassan. R

This song has received many voices over the years. Since, its launch in 1973, most famous singers have sung it at least once in their careers.

This song is a proof that Pakistan holds great importance not only for Muslims but for other minorities living in the country. It was sung by Benjamin Sisters (Nerissa, Beena and Shabana), often referred to as s phenomenon in Pakistan and North India. They belonged to a Christian family and used chorus performances in their singing.

Hamara Parcham was sung by Naheed Akhtar. It is another song dedicated to the love for Pakistani flag which has gained popularity over the past few decades.

Naya Pakistan is one the latest efforts by Salman Ahmed (former Junoon band member) and Junaid Jamshed. The song envisions a new Pakistan free of all the problems it faces at the moment.  The song was released in 2013.

This song was originally sung by Naseem Begum in the war of 1965. Later on Noor Jahan and many other playback singers gave the song their voice. Recently, Amjad Sabri used his voice to give the patriotic song a new color.

Tell us about your favorite patriotic songs in the comments section below.