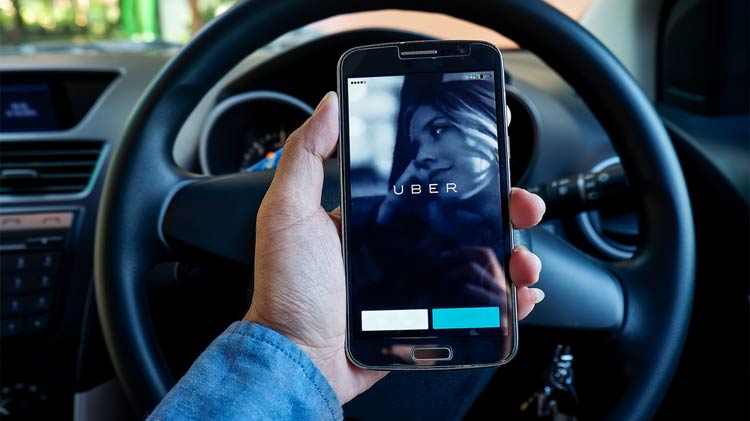 The social media user recounted how she had called for a ride with Uber for the first time, hoping that it could go smoothly.

Long story short, the ride was rather unpleasant for her. Disgusted with the service, she went on to complain to what she believed was Uber Pakistan’s official Facebook account.

This is how the conversation went between a customer and a page that purported to be that of Uber Pakistan: 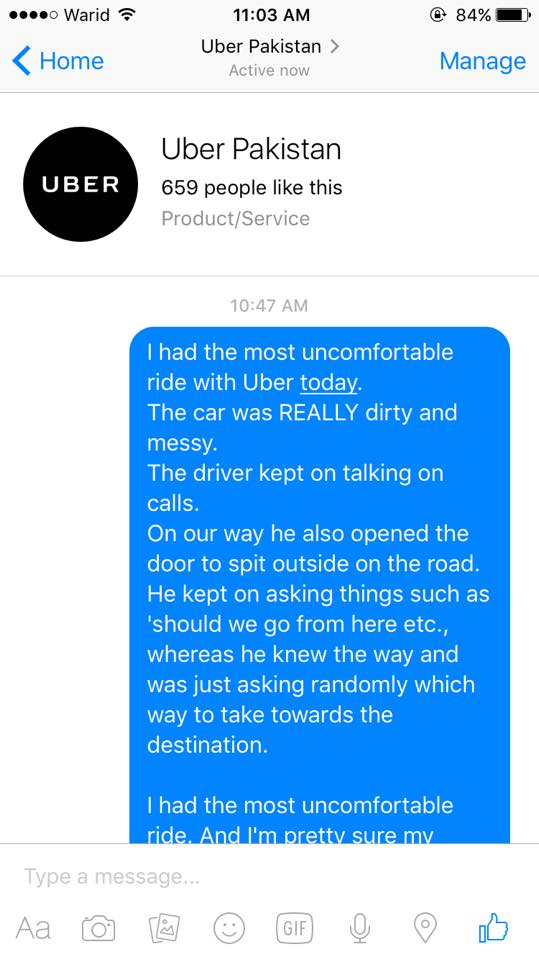 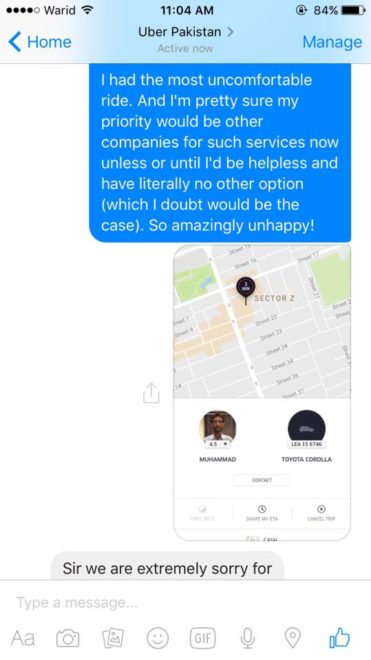 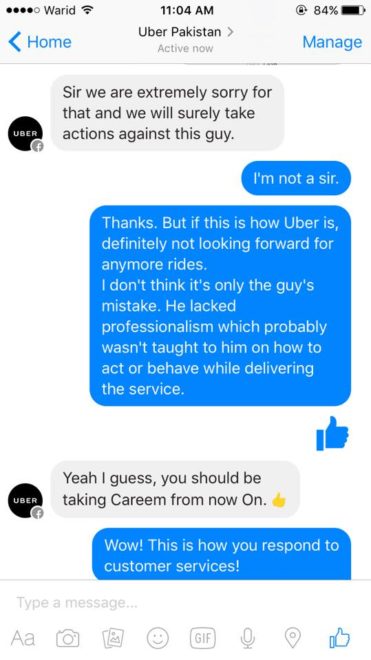 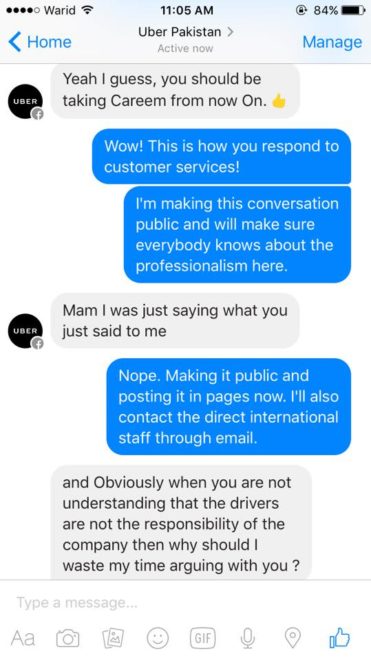 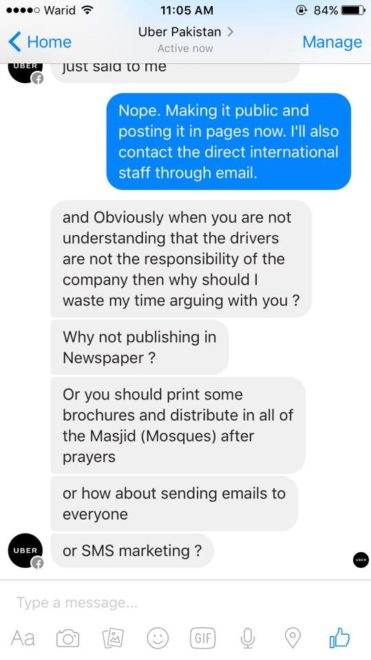 In case you skipped over the screengrabs, here’s what happened between a customer and what she believed was the official account of Uber Pakistan.

She complained to the staff (at least she thought she was speaking to the official staff). The page told her to go for a Careem in the future. And that wasn’t even the only weird thing they said.

As many of you may have guessed by now, something was rather odd about the whole exchange. Careem is, after all, Uber’s biggest competitor in Pakistan. Surely an ‘official’ page can’t do this.

Moments after this social media user’s complaint about Uber went viral, many people commented that the account she was talking to was fake. And it was easier to verify this. The official account of Uber Pakistan has a verified blue tick, in order to distinguish it from phony accounts. It seems that the victim fell for someone’s pranks. 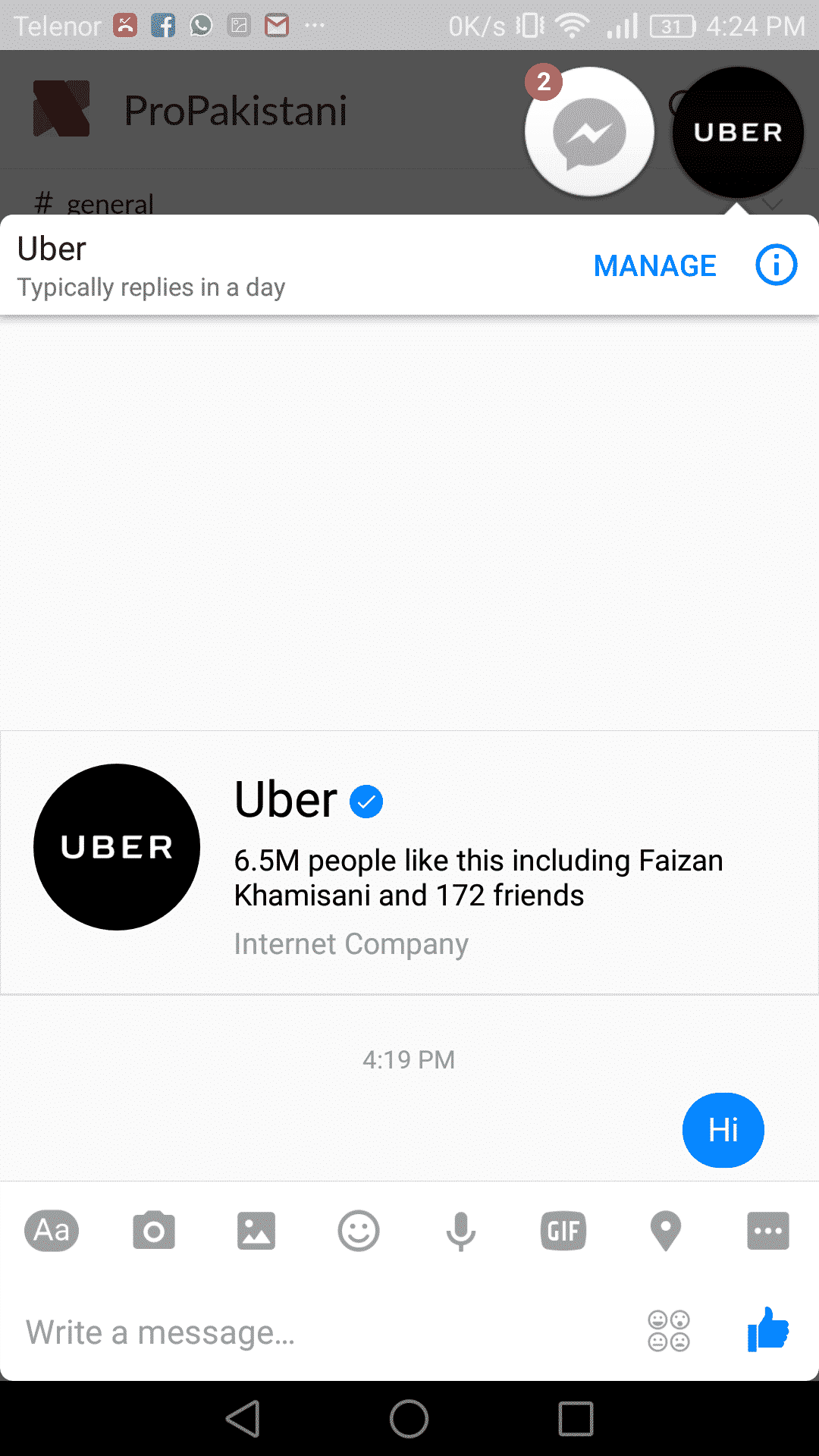 A tick mark (a.k.a verification badge) is displayed with official accounts. Moreover, the number of likes displayed with a page also reveal the realness of any account you are interacting with.

What Lessons Can we Derive from This?

In an age where Whatsapp forwards are the norm, many people believe pictures on their face value. In the above case, the social media user was corrected by other users about the fake page. But many sites are sharing the pictures, with no comments attached.

The whole story, it seems, is missing. The damage has already been done.

There are many lessons we can derive from this.

In any case, we urge our readers to be vigilant and check multiple sources for every story. It may be anything from a competitor trying to tarnish the reputation of a rival. It can be a social media user with an axe to grind. Or it may just be the truth, dressed up in another form.

The truth, as they say, can sometimes be stranger from fiction.

Also, we believe its time for Uber to setup a dedicated support (call center) for customers in Pakistan. Its has happened many times now that Uber customers end up at wrong places for complaining about things, because they don’t have a number do dial and tell their stories.

And in the interest of fairness, the same social media account also recounted another tale that supported her initial argument. The following is an exchange from a Uber driver to a female passenger from a few days ago. 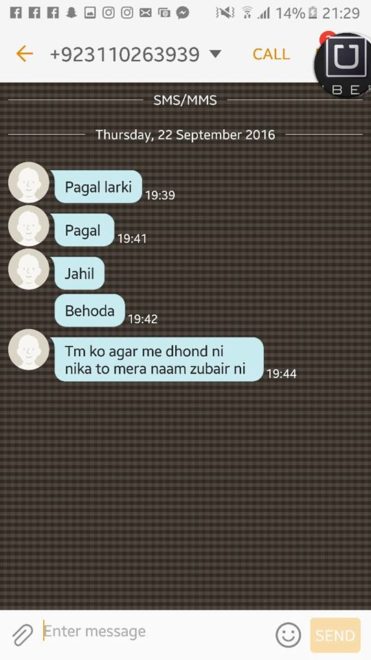 It highlights a major problem that car-hailing services like Uber and Careem are facing (and are taking measures to combat as well).

In these times, we should do well to remember Edgar Allan Poe’s words:

“Believe only half of what you see and nothing that you hear.”