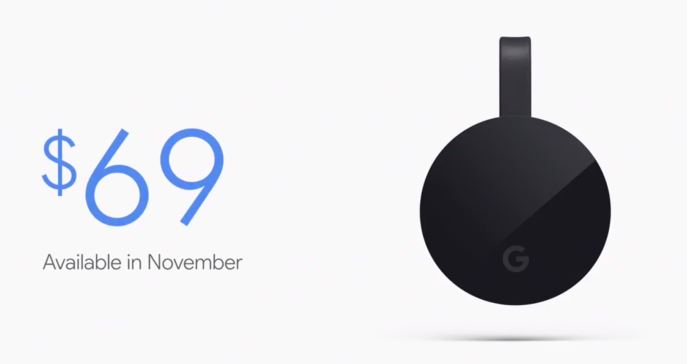 Google’s Chromecast has been an immense hit, with more than 30 million devices sold worldwide. Today, the company unveiled a brand new successor called the Chromecast Ultra.

The Chromecast is a tiny little device that plugs in via HDMI into any TV, and essentially turns it into a smart TV. You can stream media from your phone to your TV or from apps like YouTube, Netflix, etc. The Chromecast Ultra, shaped exactly like its predecessor (Chromecast 2), is even more powerful. According to Google, it is nearly twice as fast as the Chromecast 2 and comes with support for newer technology standards.

It can play 4K video and is also capable of HDR and Dolby Vision. They have also improved the Wi-Fi and have added an Ethernet port on the power brick, in order to address 4K streaming concerns.

The Chromecast Ultra will be available for a price of $69 (approximately 7200 Pakistani Rupees) in November. It is priced exactly the same as Xiami’s Mi Box, an Android TV device that also capable of 4K and HDR.

There is no word on international availability for the Ultra yet but Google’s Chromecast devices usually turn up at online shopping stores in Pakistani pretty quickly. The Chromecast 2, priced at $35 originally, is abundantly available in Pakistan for under PKR 5,000 currently.

Google’s big hardware event today showered us with new “Made by Google” hardware, from phones to smart home devices to the new Pixel phones. This marks a new turn in the company’s strategy as it plans to tackle Apple head on in the fight for hardware superiority.